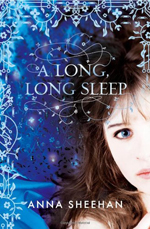 When Rose wakes after spending 62 years in stasis, her body is wasted and her organs damaged. Much worse, however, is the knowledge that her parents and Xavier, her best friend and first love, are long dead. As she learns to adapt to a world that has changed greatly after the Dark Times that occurred while she was asleep, she discovers a deadly threat to her safely – and some life changing truths about her own past.

After finishing A Long, Long Sleep, I jumped online to see whether Anna Sheehan had written anything else and was amazed to discover that this had been a NaNoWriMo project for her several years ago. Having participated in NaNo myself and making the word count target but otherwise ending up with an unfinished mess of writing, I’m amazed and impressed that such a great book was the product of her own NaNo efforts.

Because A Long, Long Sleep really is a fantastic book. I made it through right to the end of December thinking that Divergent was going to be the best YA book I’d read in 2011, and then I finished A Long, Long Sleep and felt like it just squeezed Divergent into second place. This isn’t as action-filled a novel, and the action scenes that are here aren’t quite as gripping, but I loved the way that the truth of Rose’s former life was revealed, layer by layer, eventually revealing a darkness that I would never have expected at the beginning of the novel.

It’s hard to name a definitive genre for A Long, Long Sleep. It’s futuristic science fiction, complete with all the tech, off-planet colonies and aliens that you would expect from that genre, but its heart isn’t in these elements as much as it is in the exploration of Rose’s character and the ways in which humans treat – and fail – each other. The tech is intrinsic to the storyline, but the characters can be recognised just as easily in the present era as in a future setting.

Rose is not a simple protagonist. The holes that Otto sees in her mind distance her a little from the reader at first. Although the novel is told in first person, we learn more from flash backs than from Rose’s own accounts of her feelings and personality. While this means that she is not immediately likeable, it also means that we discover who she is as we discover why she is. As the book progresses, she becomes more and more sympathetic and more and more impressive as the novel’s lead.

Xavier is seen mostly in flashbacks, and entirely through Rose’s eyes, which makes him something of an enigma, even by the end of the book. I felt very much that his value was in who he was to Rose and what he represented in her life, rather than in his own personality and actions. In contrast, I adored Otto. I thought he was the perfect foil to Rose and, while I was a little doubtful about the text-based conversations between the two at first, I do understand the benefit of this technique with regard to the progression of two characters who are closed to their peers in very different ways. I thought Otto was good for Rose and very important for Rose and I feel that his story serves to temper her own in a way.

I picked up A Long, Long Sleep because it looked mildly interesting and I thought it might be something that my partner would enjoy. I’m glad I did so, because it was clever and thoughtful and dark and hopeful – all the things that I love to see in a book. A fantastic debut by Anna Sheehan. I hope to see more from her very soon.