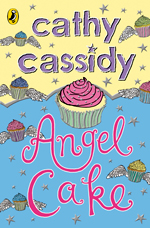 I’m a fan of Cathy Cassidy’s books. She’s similar to Jacqueline Wilson in that her characters come from diverse backgrounds and often belong to non-nuclear families and families with financial difficulties. Angel Cake is no exception. Its protagonist is Anya, a young girl who has just arrived in Liverpool from Poland. Her father has brought the family to England to make a better life there, but the reality is different from Anya’s dreams and the financial climate means that their family struggles to survive in their new home.

Cassidy’s choice to write about a Polish character is particularly important given current levels of ill-feeling about EU immigrants in the UK – with Polish workers seeming to cop the brunt of such sentiments. It’s great that young readers are shown Anya’s story and the difficulties experienced by immigrants in their quest to settle into a new home, because it provides an alternative to this kind of negativity.

Despite her Polish background, however, Anya is very easy for the reader to identify with. She has a quiet presence in the novel, but her concerns are those of many teenagers her age – forming friendships, spending time with family and taking steps towards her first romance. I particularly enjoyed the strong relationship that Anya has with her family. She is close to her younger sister and her parents are loving and supportive.

Anya’s friends are not quite as well-developed, and I found that Frankie and Kurt felt very flat to me. I was also a little disappointed that Frankie’s happily-ever-after largely involved her losing weight and changing her eating habits to match those of a boy; this wasn’t the kind of message I expected to find in a Cathy Cassidy book. Dan is more three-dimensional than Anya’s other friends, but I still felt like there was something missing. It seemed almost as though there needed to be a deeper insight into who he is.

In fact, there is a level of shallowness to Angel Cake that makes me think it’s best suited to the tween market. Things are a little too simple for older teens to find the story entirely convincing. Those who belong to the right age group should love it, though, and it’s great to see an immigrant’s story being told in mainstream youth fiction.