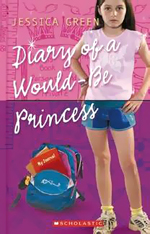 Diary of a Would-Be Princess is an enjoyable work of junior fiction with a personable and realistic protagonist. Jillian is spirited and headstrong, but she’s also extremely kind – a trait that becomes more and more apparent as the book goes on and she gathers her growing group of grade five outcasts. Her voice is very strong and is pleasantly consistent throughout the novel.

The book is structured as a year-long journal that Jillian and her classmates are required to keep as an ongoing assignment in school. This allows for my favourite part of Diary of a Would-Be Princess – the short comments from Jillian’s teacher, Mrs. Bright, at the end of most weeks. These are perfectly reminiscent of the type of comments I used to receive on similar journals that I wrote back when I was in school, and offer a good additional perspective on events.

The downside to the structure is that I felt like the book was one term too long. By the end, it felt a little like the same territory was being re-covered, just with a slightly different focus, and this coloured my overall opinion of the book somewhat.

Nonetheless, it remains a likeable work, with a message of acceptance and friendship that is capably hidden beneath accounts of everyday life in grade five. Jillian has grown in herself by the end of the novel, but she has also helped those around her to achieve their own successes, something that sets Diary of a Would-Be Princess aside from many other books with similar themes.