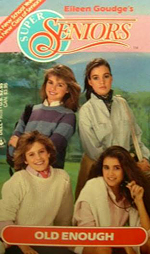 It’s the start of a new school year and a new senior class is about to take over at Glenwood High. Before the year begins in earnest, however, the senior group head to a lodge resort for an orientation camp – four days of hiking, swimming, making friends and starting romances. Gloria Larson is worried that her summer boyfriend will lose interest when he finds out who she really is, while Angie Maroni is trying to find her place at a school where her family’s reputation has tarnished her own. Will the camp provide the positive start they’re both looking for, or will the school year be ruined before it even truly begins?

When I was in my early teens, or perhaps even pre-teens, I adored the Seniors series, because they felt so deliciously naughty compared to Sweet Valley High. Sure, Sweet Valley had Bruce untying Jessica’s bikini strings, but Seniors had actual, proper sex. It was a bit like the first time you read Forever, after reading all of Judy Blume’s other books. It made me a little bit uncomfortable, sure, but that was nothing compared to the thrill of reading something that I was fairly certain my mother wouldn’t want me to be reading.

Old Enough, however, doesn’t star the Seniors characters I remember from my childhood. The focus is on a new senior class, with several of the old girls having cameos, presumably to keep the interest of the fans. Of the new cast, Angie was the only character who really appealed to me. Gloria is shallow, Lani is peculiar and Nancy didn’t seem to have a personality at all! As an introduction to a new series direction, it’s not a very good one.

That said, the plot isn’t bad. The Angie storyline is very reminiscent of the kind of plots favoured by the old Sweet Dreams series and the writing is fine for this type of book. Old Enough hasn’t put me off revisiting the Seniors characters I remember at a future point in time, but I’m not sure I’ll bother with further books starring this group. 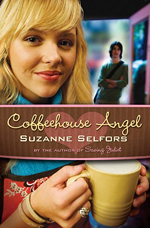 When Katrina discovers an oddly-dressed boy asleep in the alley behind her grandmother’s coffeehouse, she assumes he’s homeless and leaves some food and coffee for him. But then everything she thinks she believes is thrown into question when the supposed vagrant finds her later and tells her that he will grant her greatest desire to reward her for her kindness. With the coffeehouse’s future in grave danger, the last thing Katrina needs is a deluded boy in a kilt following her around… even if he is extremely good-looking. It’s not as though he can really grant wishes. Right?

I picked up Coffehouse Angel thinking that it was a contemporary YA novel, courtesy of the cover and the back blurb. If I’d looked inside the front cover, I’d have realised that it’s actually a supernatural romance but, instead, I discovered this once I realised that Malcolm isn’t just your average teenage boy. I’m actually glad I was surprised, because I’m not sure I’d have picked this up otherwise and it was a very pleasant read.

The absolute stand-out aspect of Coffehouse Angel is its sense of place. Selfors explains that the book’s location was based on a town near where she lives, and it’s possible that the fictional Nordby feels so authentic due to this. As an Australian, I was fascinated by the depiction of an American town that mixes surprisingly strong Scandinavian ties with local Native American culture. Selfors creates a wonderful cast of minor characters; the men who frequent Anna’s Old World Scandinavian Coffehouse are particularly appealing.

The teenage characters are also well-crafted. Katrina is a likeable and accessible protagonist – although I’m not sure how being five foot eight makes her an undateable giant! It seems quite an average height to me. Elizabeth and Vincent work well as foils for Katrina’s character, with Elizabeth providing creativity and humour and Vincent providing a sense of safety and stability that is most obvious once Katrina thinks it’s gone.

Malcolm reminded me enormously of the Eleventh Doctor – a comment that will mean nothing to readers who are not familiar with the revamped ‘Doctor Who’. He combines childlike actions with a sadness which hints at far more worldly experience than is initially apparent. As a potential love interest, however, I’m not sure how alluring he is.

I enjoyed Coffehouse Angel because it casts aside the supernatural stereotype of a weak female protagonist being rescued by a supernatural love interest who becomes her entire world. Katrina makes her own choices and lives her own life. She learns and grows and rescues herself.

That said, there was something missing for me. I cared about the future of the coffeehouse and Katrina as a character, but I think the storyline was a little slow-moving for my liking. I would certainly seek out other books by the author, however. 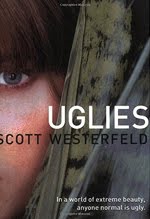 Tally is looking forward to her sixteenth birthday, when she will finally become pretty. At that age, all teenagers receive extensive plastic surgery to remove and refine all of the physical features that set them apart from each other, changing Uglies into the generic Pretties, who spend their new lives partying and having fun. But then Tally meets Shay, an ugly who shows Tally that there is an alternative to the future she’s always expected, and soon Tally is forced to make a choice that she never thought she’d face.

I’ve seen a lot of discussion of this book on Goodreads over the years, so when a copy finally turned up at my local library, I thought it was about time I tried it for myself. Ultimately, I enjoyed the read, but came away from it feeling like Uglies could have been so much more than it actually was.

As a premise for a YA novel, it’s a good one. The focus on appearance, to the detriment of everything else, is particularly relevant to the teenage age group. There’s something immediately uncomfortable about a world that strives towards homogenisation instead of the acceptance and promotion of diversity, and Westerfeld does a good job of depicting his dystopian world.

However, most other aspects of the book do not prove as interesting as its premise. The characters are mostly one-dimensional and Tally seems to me to be a particularly uninspiring protagonist. I understand Westerfeld’s difficulty here. Tally has been brought up in a society that forms its children into acutely shallow beings, and her thoughts and actions are an immediate by-product of this life-long indoctrination. As a character, therefore, she is true to her world. But this authenticity proved to be a barrier to me. I disliked her weakness, her gullibility and her deceptiveness. I found myself wanting her to fail.

For me, the most interesting and likeable character was Shay – but only in the beginning. From Part Two onwards, her relationship with Tally warps into one of feminine rivalry, with a boy in the centre (of course). I, for one, am tiring of endlessly being told by books (and films and television) that women are in competition with each other. I am hoping that something comes of this plot point in later books, because otherwise it’s just hackneyed and destructive.

My other big issue with Uglies is the fact that Westerfeld focusses almost entirely upon physical differences. There is a brief mention of race, but no talk of culture. How do the many religions fit into his world? What about disability? Homosexuality, bisexuality, transsexualism? It’s almost as though his world picture is unfinished. Not having read the rest of the books in the series, I’m hoping that these questions are dealt with in later books but, judging Uglies on its own merits, it felt like there were a few gaps that negatively affected my reading experience.

All that said, I did enjoy this book. It’s a fast-paced read, with a fun concept, plenty of adventure and a cliff-hanger ending that had me ordering the next book into my local library right away. I’m just harsh because it could have been incredible, but instead it was just a lot of fun.