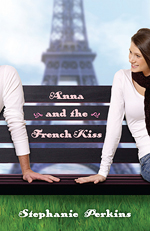 People have been raving about Anna and the French Kiss for as long as I’ve been book blogging. As a great lover of contemporary young adult romance, my interest was obviously piqued, but I didn’t rush to get my hands on a copy because I was worried it wouldn’t live up to my inflated expectations. I need not have been concerned. Anna and the French Kiss is just as wonderful as everyone says it is.

The thing with contemporary romance is that it’s a genre where it is particularly obvious that there are only so many stories to be told. The key to a good novel, therefore, is not in the level of originality so much as it is in doing things well and with heart. And Anna and the French Kiss definitely has heart.

Anna makes for an extremely likeable protagonist. While she is beautiful (of course), she is not perfect. In fact, she learns a few important lessons about herself as the novel reaches its climax. She makes mistakes, but once she realises this, she works to put them right, which is the thing that matters. I particularly enjoyed the fact that Anna is passionate about something other than Étienne – film – and that her plans to study it remain firm despite her feelings for him.

Étienne himself is basically constructed by Stephanie Perkins to steal the hearts of a good number of her readers. He is thoroughly charming and always quick to defend and support Anna. There is the clichéd American fetishisation of a British accent, which I always roll my eyes at, but luckily Étienne has more to him than an accent and floppy hair. I liked the fact that he is short and that the trials in his life actually have an effect upon his behaviour.

Both the friendship and romantic tension between Anna and Étienne feel very real. Sometimes, romance can feel forced, but that is definitely not the case here. More importantly, neither Anna, nor Étienne, are forced to alter who they are in order to work together. My only concern with the relationship is the fact that, as charming as he may be, Étienne does not really strike me as a good long term relationship prospect. You wouldn’t catch me placing too much trust in sometime with such a history of extreme emotional cheating!

As a brief aside, I often struggle with books with an ‘American Goes Abroad’ focus, simply due to how the other culture is so often described in a patronising manner. This is absolutely not the case in Anna and the French Kiss, which I found very pleasing. In fact, any negativity is directed towards America itself – so perhaps the awkward feeling for non-American readers will be replaced by one for Americans!

Anna and the French Kiss is a warm and enjoyable novel, with characters that are easy to like and an overarching will-they-won’t-they plot thread that is very appealing. Stephanie Perkins deserves the praise that this novel has received and I very much look forward to reading the companion books.

Review: Forget me not – Sue Lawson