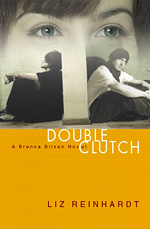 Brenna Blixen is back in the States after spending a year in Denmark with her mother and Scandinavian stepfather and she’s determined to make the most of being back in the company of people her own age. What she doesn’t expect, however, is to fall for two boys on the very same day – both with their own mix of positives and negatives. Will she choose Saxon or Jake… and if she makes her choice, will the loser just stand back and accept it?

There has been a lot of talk recently about people being sick of love triangles in YA fiction. I’m not one of those people. The love triangle has been a staple of romance since long before it started involving vampires and werewolves, as Reinhardt herself shows with her reference to Sense and Sensibility at the end of Double Clutch. The love triangle is perpetuated in literature because it works as romantic conflict – and there should be no need for it ever to be boring if an author treats the cliché with expertise (and provides two fanciable alternatives for the protagonist to choose between)!

In Double Clutch, Liz Reinhardt does just that. In Jake and Saxon she has created two potential love interests who will charm readers just as much as they charm Brenna. Better still, there are enough similarities between the two boys that it feels feasible that Brenna should be attracted to both of them, even if Jake is generally portrayed as the bad boy gone good, while Saxon is still hanging on to his share of the bad. There’s an edge to Jake that is evident underneath his politeness and chivalry, and a soft centre hidden beneath Saxon’s insinuations and cigarettes.

Brenna is a likeable and interesting protagonist, even if she is a little too perfect for my liking, as is the norm when it comes to YA romance. Her beauty, creative talent and athletic prowess are important, however, to establishing the believability of the strong (and lasting) attraction that both Jake and Saxon feel towards her. For me, the best thing about Brenna is her relationship with her parents. I love it when parents in YA fiction are represented as being present and caring, even if that sometimes means the protagonist doesn’t get her own way.

Despite the fact that Brenna is not yet sixteen, there is a fair amount of sexual content in Double Clutch, and I wouldn’t recommend it for younger readers. The sex scenes (although other readers will not consider them to be such, given different opinions on what counts as sex) are more frank and detailed than one would usually find in a YA novel. Although they are unusually well-written – and I personally feel that sex scenes generally aren’t – they will undoubtedly be a little too steamy for some younger readers.

Double Clutch is a fun read, because it feels a little bit like treating yourself to a family block of chocolate and a DVD when you’ve homework that you could be doing instead. It’s easy to get caught up in the feeling of living in Brenna’s head and world and having two boys falling over each other to gain your her favour. The boys themselves are more eloquent and more willing to talk about their feelings than any teenage boy I’ve ever known, but therein lies the appeal of romance!

One for all the romance lovers out there.

Review: Over My Head – Marie Lamba