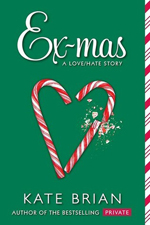 Ex-mas is enjoyably fluffy. Like many contemporary romances, it’s rather predictable, but the storyline is pleasant and the writing style is low-key and unobtrusive. I read it on public transport, and it’s the perfect sort of book for that situation. You don’t have to think too much, and it’s likeable enough that the time passes quickly.

I’m a big fan of queen bees, so I got excited when I realised that Lila was one of the two most popular girls in her school. This isn’t a story about popularity, however, but rather one about the choice between being popular and being yourself. In this sense, it has a good message, but I found Lila’s dilemma a little unconvincing, given that she’d spent three years working at gaining and maintaining her place in the social hierarchy of her school. That shows commitment!

I struggled to find the connection between Lila and Beau convincing as well. For starters, their background is that they dated through middle-school and into their freshman year, and this is represented as having been an extremely serious relationship, with them being in love with each other. I really needed them to be aged up a little if I were to believe in their past and their rightness for each other. In contrast, Lila’s three year relationship with Erik is written more like a three month relationship. I know dating is different in America, but it still didn’t ring true to me – especially as Lila’s memories of Beau being controlling are never really addressed.

Then again, it never pays to think too deeply about a lot of novels, and Ex-mas is entertaining enough that I was able to put aside my questions and enjoy the plot. Road trip stories are always fun, and here the purpose for the trip adds an extra element of interest to the story.