In Genre: YA Contemporary, Genre: YA Romance, Reviews 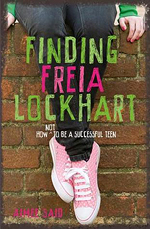 Freia knows she doesn’t really fit in with the ultra-popular Bs, but her best friend Kate is so eager to become a part of their clique that Freia can’t help but be pulled into their circle as well. When her reluctant participation in the school musical helps Freia to make a few new friends – and actually talk to boys – she is forced to think about who she really is and where she belongs.

Aimee Said has such a talent for making her teens seem real – so much so that I cringed a few times while reading Finding Freia Lockhart, because Freia reminded me a little too much of myself at fifteen! The situations here are all very realistic as well. School musicals are notorious for causing drama (and gossip), and struggles with personal identity and changing friendship groups are ones that will ring true for most readers.

Freia is a wonderful protagonist, simply because she is so very real. Her struggles with her parents are particularly well described, as the reader can feel both Freia’s frustration and understand the place her parents behaviour comes from. Freia grows a lot throughout the novel, and this growth is largely due to the changing relationships she experiences with both her parents and her peers. Freia comes across as someone who is just starting to think about her place in the world, and her journey towards independence is a pleasure to follow.

The three Bs are all very fun characters. Said gives them all distinct characters, with Brianna being the most likeable and Bethanee seeming like a Mean Girl to beat all Mean Girls! I would have liked a little more discussion of Belinda’s extreme dieting, in terms of showing just unhealthy it is (in both mental and physical terms), but realise that Finding Freia Lockhart is not meant to be a book about eating disorders. I thought Kate worked very well too, even if I couldn’t like her. Just as the novel is about Freia finding herself, it seemed to show Kate losing herself in her quest to be popular, which makes her a great foil to her best friend, but also reduces her likeability a little.

My personal favourite character was the fantastic Siouxsie. I loved how she’s always there in the background, quietly offering friendship to Freia, even when Freia is completely oblivious to it. She is sweet and interesting – and I pictured her looking like Siouxsie Sioux all the way through the book! A rather more terrifying mental image was provoked by the book’s descriptions of Daniel, who I ended up picturing as Skeletor with emo hair and Mick Jagger lips. He works well as a character, however, and I can picture him being a hit with younger readers, especially once the truth about him becomes clear.

Finding Freia Lockhart is an enjoyable coming-of-age tale that focusses on changing friendships, family dynamics, first romance and, most of all, the process of working out who you really are. A great Australian addition to the contemporary YA genre.

Review: Across the Universe – Beth Revis