Review: He’s After Me – Chris Higgins 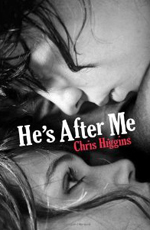 When Anna meets handsome, doting Jem, it feels like her life is finally going right. Still struggling to cope with her father having left her mother for a much-younger workmate, she is glad to have something positive to focus on. Quickly, Jem becomes the centre of her world. But soon her friendships and schoolwork begins to suffer. Is Jem the perfect boyfriend she thinks he is?

He’s After Me is a quick and easy read, written as it is in an informal style with a lot of short sentences, dialogue and internal monologues. Despite this, it deals with a subject that is far from easy. Anna is involved in an obsessive relationship and Jem is an overly-possessive boyfriend, who isolates her from her friends and former life and instead leads her into a life of lies and crime.

As a commentary upon abusive relationships, the novel works well. Chris Higgins does a good job of capturing the pull of different emotions experienced by Anna and the conflict between her desire to be with Jem and her reluctance to completely leave her old goals behind and enter an adult life she’s not quite ready for. Because the story is told from Anna’s unreliable viewpoint, the reader is shown all of the positive sides of Jem’s personality, while his bad points are quickly glossed over.

Unfortunately, the effect of this is lessened by the inclusion of short, italicised sections of text that sit between one or more of the main chapters and give the perspective of an unnamed male character. I assume these are included in order to add a sense of tension and suspense to the novel, but I personally found that they had the opposite effect. I guessed the twist in the tale very early in the piece and found that the overly-sinister comments felt clichéd and detracted from the real horror portrayed in He’s After Me: the loss of self to a toxic relationship.

Indeed, I think it was the combination of realistic relationship story and melodramatic thriller that just didn’t work for me. I felt like I needed He’s After Me to be one or the other. It wasn’t intense enough to work as a thriller and not measured enough to truly explore the issues involved with obsessive relationships. In addition, I was not able to connect with any of the characters, so the ending didn’t move me at all.

Other readers have definitely enjoyed He’s After Me and there was nothing bad or offensive about it; it just wasn’t for me.