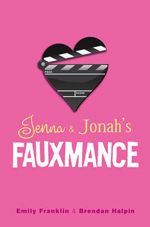 Charlie and Aaron play girlfriend and boyfriend on a top family television program. In order to boost the show’s popularity, they also pretend to be in love in real life, an act that can be difficult to maintain when they annoy each other so very much. But then their cover is blown, their career is on the rocks and the two teen stars are forced to weather a frantic media storm without the old roles to depend upon.

Jenna & Jonah’s Fauxmance is a light read with three distinct parts. The first section concentrates upon Charlie and Aaron’s life as teen megastars, the middle focusses on their time hiding out together following the outing of their fake romance and the ending is set at a Shakespeare festival, where they have been cast as Beatrice and Benedick in Much Ado About Nothing. The difficulty with this is that each section felt quite distinct and I had mixed feelings about the book as a whole. The first part was fun, the second part dragged a bit and the final section was far more my kind of thing. There’s still a focus on the relationship between Charlie and Aaron (after all, this is a romance), but there’s a strong coming-of-age element as well, and the two protagonists are allowed some real character development, which was lacking in the earlier part of the book.

Although the novel draws its ideas from Much Ado, it is not really a modernisation as such. Certainly, there are some strong similarities between Charlie and Aaron and their Shakespearean characters, but this is not really played up until the final section of the book. At most points, it reads like a standard fame-based contemporary romance, which I think is a positive. Connecting Jenna & Jonah’s Fauxmance too closely to Shakespeare’s work would undoubtedly highlight the former’s shortcomings, whereas it stands on its own as a fair example of its genre.

Jenna & Jonah’s Fauxmance switches between chapters told from the first person perspective of the two protagonists. I am not sure whether Emily Franklin and Brendan Halpin took on a character each, as some other collaborations have done, or whether they contributed equally to each perspective, but I did find that the two character voices could seem a little indistinct at times. The biggest difficulty I had with this style of narration, however, was the fact that occasionally the reader is subjected to reading about the same events twice, but from different points of view, which often meant jumping backwards in time with the change of chapter. This seemed to happen more and more towards the end of the novel, and I found it quite a clumsy technique, which really took me out of the action rather a lot.

When it comes to likeability, I think that Aaron will be the more popular of the two main characters. Charlie is very realistic, and I enjoyed the way that she allowed herself to be more vulnerable as the story progressed, but she has an edge to her character that makes her initially more difficult to like. Aaron, on the other hand, always seems more down-to-earth. I’m not sure that he’ll end up a major fictional hearthrob, but he’s an interesting character who is not as distanced from readers by his television stardom as Charlie is.

If you’re looking for a light romance, you could definitely do worse than Jenna & Jonah’s Fauxmance, especially once the character development starts to kick in. It’s not the kind of book that will stick with me forever, but it was a pleasant way to while away a train trip.