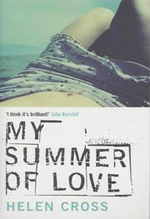 I watched the film of My Summer of Love earlier this year. It was one I’d picked up super cheap at some point in time, completely unaware that it was related to the novel I’d had sitting in my bookshelves for years, waiting to be read. I didn’t like the movie at all, so I had very low expectations for the book it had been based upon. Luckily, I enjoyed it a lot more than I had been expecting.

My Summer of Love is tightly written with a very strong voice. The protagonist is fifteen-year-old Mona, and the novel is presented from her flawed perspective, complete with slang and local dialect. At first, it’s a simple tale of teenage boredom and family drama, centred around Mona’s sister’s second wedding and life at her father’s pub. But then she meets Tamsin (for the second time) and Mona’s penchant for gambling, drinking and petty crime descends into something a lot darker.

While reading My Summer of Love, I was strongly reminded of the absolutely brilliant film, Heavenly Creatures and, upon finishing, I realised that it also has many similarities to The Member of the Wedding, by Carson McCullers. There’s a strong sense of apathy here that belies the obsessive emotion that Mona says she feels for Tamsin. As readers, we are not given the impression of a young girl caught in the flush of first love; rather we see someone broken and breaking further apart, with no apparent care for what she does and who she does. My Summer of Love is not so much a tale of love as it is an account of deep grief and the (unknowing) quest to find something to feel.

The main pairing in the novel is a lesbian pairing, but I am not sure that this matters at all. Mona doesn’t question her attraction to Tamsin, but rather lets it slot easily in amidst her growing awareness of men and her attractiveness to men. I found this refreshing, but not entirely realistic, given the novel’s setting.

I am not entirely sure why they changed the novel so very much when making it into a film. Certainly, there is not a lot in the film that bears any great resemblance to the book, which is a shame. My Summer of Love is dark and clever and very good. On the other hand, I would not read it again, simply because I didn’t like the ending. I’m not sure it was sufficiently supported by Mona’s journey and, in a purely personal sense, it just felt too dark and pointless. The first line of the novel talks about the day that two people died. If it had only been the first person, I think the ending would have been perfect.

Still, the fact that I didn’t enjoy everything about My Summer of Love doesn’t mean that it isn’t a very clever novel, with strong characters and a wonderful feeling of apathy and destruction throughout.