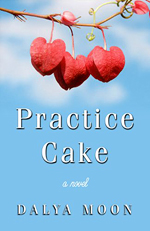 Maddie has just finished high-school and found herself her first full-time job at an independent bakery. As much as she enjoys her work, however, the best part of her new career is her coworker, Drew, who is far too tempting for a girl who’s supposed to have a serious boyfriend. When a chance meeting with a Bakery Network executive promises to turn Maddie into the latest reality television star, she realises that her life isn’t about to become simple again any time soon!

Practice Cake is a light-hearted contemporary YA novel with an underlying message about growing up and discovering your worth as a woman. For some reason, I’m an absolute sucker for novels that focus on workplace settings, so I loved the idea of a book set in a bakery, even if it did make me hunger for baked goods far too much while I was reading it! Angelo’s bakery is not just set-dressing, either. By the end of the novel, the reader really learns to care about the bakery and its survival.

As a protagonist, Maddie is extremely realistic. She really does feel like a young woman caught on the cusp of school and the real world. She’s still trying to work out who she is and where she wants to go in life, and is easily distracted by boys in the meantime. The fact that she’s still trying to work things out means that sometimes Maddie’s decisions can be extremely frustrating for the reader to witness. There are a few points during the novel where I wished I had the ability to poke my head into the action and send Maddie on a different direction. It’s Maddie’s mistakes that make her so human, though, and they’re only so frustrating because I remember making a few similar ones myself at that age!

Most of Maddie’s mistakes have something to do with the boys in her life. I have to admit, I didn’t really like Drew much even from the very beginning of the novel. He is super flirty and good looking, so I understood Maddie falling for him so quickly, but that flirtatious nature rubbed me up the wrong way a little. It seemed particularly frivolous in comparison to Angelo’s quiet and hard-working nature. Likewise, I didn’t understand what Maddie saw in her boyfriend, Parker. He seemed completely wrong for her, and didn’t value her enough at all. Indeed, a good deal of Practice Cake involves Maddie putting up with boys not giving her the value and respect she deserves and I particularly enjoyed the way that Dalya Moon highlights this through Maddie’s own frustration at her sister’s romantic choices. It’s only once Maddie grows stronger in herself that she falls into a relationship worthy of her time.

Some of the more minor characters in Practice Cake are the most memorable. Jaslene is completely over the top and yet somehow very realistic and I enjoyed the contrast between her obvious vulnerability and outward actor’s ego. (Bonus marks to Moon for the matter-of-fact mentions of Jaslene’s mothers.) Likewise, Roxanne is a great character who I enjoyed in all of her guises. She’s not immediately likeable, but she’s good people underneath.

One thing I wished while reading Practice Cake was that the novel had spent a little more time on Maddie’s family situation. We only meet her mother at the very end of the book and it turned out that I’d made quite a few incorrect assumptions about Maddie’s reasons for living with her sister. I loved that Moon created a background that supported the sisters’ romantic choices and would have liked to learn a little more about it. Then again, I guess that would be a novel in itself.

Practice Cake is an enjoyable read with a carefully constructed universe and plot. It should strike plenty of chords with young adult readers.