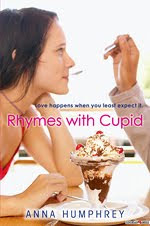 Elyse has not been a fan of romance, since she discovered her (ex)boyfriend and her (ex)best friend making out on her bed last Valentine’s Day. Unfortunately, her job in a gift and stationery store means that she’s surrounded by mushy cards and singing cupid dolls as the anniversary of the dreadful day approaches. At least there’s the distraction of attempting to set up her friend and co-worker with Patrick, the cute guy from the key-cutting kiosk at the mall. But what happens if Patrick turns out to be part of the elusive two percent of decent boys in the world and Elyse has missed her chance?

Rhymes with Cupid is a sweet, traditional young adult romance. The plot is not particularly distinctive, but this is made up for by the likeable characters and overall feeling of warmth that the book conveys.

Elyse, the novel’s protagonist, is cynical and witty, and both her emotional walls and her underlying vulnerability are qualities that make her very easy for readers to identify with. She is far from a flawless character – she rejects Patrick’s offers of assistance, friendship and romance quite callously and shows herself to be melodramatic and easily panicked at times – but her good qualities balance the bad and allow her to remain likeable.

Patrick, on the other hand, is probably a little too perfect. He’s caring and helpful and talented – and good looking to boot! While a lot more than Elyse’s two per cent of men are decent, I’m not sure many at all would be as near-flawless as Patrick is. But it’s that very quality that makes him the kind of male lead that a lot of readers will adore. Romance fiction often isn’t about being true to real life. It’s about the fantasy – and Patrick, at least, is a much more healthy fantasy ideal than Edward Cullen.

I must admit, my least-liked aspect of the novel was the epilogue. I find that they are rarely needed and often unsatisfying ways to end a book. I like it when things aren’t perfectly tied up in the end. I like room to imagine what happened after the final paragraph and, while this epilogue felt in keeping with the previous characterisation and plot, I think the book would have been stronger without it.

Rhymes with Cupid is written in an accessible style, with a strong first person voice. It’s an easy read, perfect for public transport or to pack in your suitcase. While it didn’t grab me as much as some contemporary YA romances have done, it is nonetheless a good example of the genre and shows that Humphrey is an author to keep an eye on.