In Genre: YA Crime & Thriller, Genre: YA Romance, Reviews 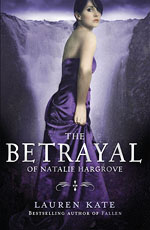 For years, Natalie Hargrove has been working towards achieving the ultimate high school goal – becoming the next Palmetto Princess. Coming from a less-than-exclusive background, she is always conscious of maintaining the necessary appearances to ensure her reputation remains unsullied as she pursues her prize. But then a tragedy causes Natalie’s carefully-constructed world to start to unravel…

I adore books about high school queen bees, and about the trials and tribulations of teen popularity, so I thought that The Betrayal of Natalie Hargrove would be right up my alley. Unfortunately, it seemed to miss the mark, and I am struggling to articulate why it didn’t quite work for me, because there were so many elements that should have made me love it.

There is a thoughtful exploration of life and character that lies beneath the glitz and drama of Lauren Kate’s plot. The true nature of Natalie’s deprived and depressing past is gradually revealed as the book unfolds, and there are thought-provoking contrasts between the two very separate elements of society that can be found in the town and in Natalie’s own history. Kate presents a picture of people with no prospects and little hope, against which Natalie’s social climbing and ruthlessness become more easy to understand.

While the two socio-economic groups detailed in The Betrayal of Natalie Hargrove seem worlds apart in some ways, Kate also shows that they’re a lot more similar than her characters might consider. Indeed, the reader is forced to ask whether Natalie was really any safer once she had “made it” than when she still lived in a trailer. On both sides of the tracks, sex, drugs and alcohol rule. Natalie tries so hard to put behind the world in which a girl like her is only useful for sex, but yet her relationship with her boyfriend – overtly described as loving – is shown to be largely based around sex. It is the main way that Natalie and Mike know how to relate to each other and, once sex and physicality are removed, they flounder. It is also sex, and her mother’s willingness to use it as currency, that got Natalie out of the trailer park in the first place.

On an intellectual level, therefore, I have a good amount of respect for this book. Lauren Kate says rather a lot beneath the facade of a fairly fluffy story. My trouble with The Betrayal of Natalie Hargrove is that this facade just doesn’t work for me. The reader is presented with a cast of unlikeble characters. Natalie herself is self-focussed beyond the point where it is easy to excuse her behaviour through knowledge of her past, Mike is almost entirely bereft of personality and the supporting characters are either caricatures or similarly unlikeable. J.B was, by far, the most interesting character to me and he isn’t in the book much at all.

I found that the writing style also distanced me from the novel. The choice of first person seemed odd, given the book’s ending, and both the prologue and the epilogue felt over-written. More importantly, however, the world of The Betrayal of Natalie Hargrove doesn’t feel real. It read to me like a fantasy of what it is to be popular and daring and to be dating a fabulous boy.

While, on the whole, The Betrayal of Natalie Hargrove didn’t quite work for me, it certainly wouldn’t deter me from picking up Fallen. I saw a lot of promise in the ideas behind Kate’s writing, even though the style and characters of this work were not as strong as I would have liked.