Every so often I try to be a better reviewer, and shortly afterwards realise that my head really doesn’t work that way. I do want to talk about the things I’ve been reading, though, so I’m going to experiment with a monthly post that includes copies of the book-thoughts I post on Goodreads/Library Thing and perhaps a bit of extra commentary.

March was a bit unusual for me, because I had surgery at the end of February and was therefore going through various stages of recovery during March. Because of this, I was mostly watching reality TV at the beginning of the month. That said, I did eventually do some reading, much of it PhD-focused.

My favourite fictional read this month was easily The Serpent’s Skin, by Erina Reddan—such a strong, original voice! As for non-fiction, I particularly enjoyed Prostitution and Victorian Society, by Judith R. Walkowitz, which combined thorough research and an engaging writing style.

END_OF_DOCUMENT_TOKEN_TO_BE_REPLACED 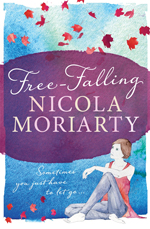 If Nicola Moriarty’s surname sounds a little familiar, that’s because her sisters Liane and Jaclyn are also authors. With Free-Falling, Nicola makes her own writing debut – and it is one that shows that talent sometimes really does just run in a family!

Free-Falling is a novel about loss, first and foremost. However, it’s also about moving on from great loss, and about the convoluted, complicated journey that may entail. Due to its focus, this novel can be very hard to read at times. The first two chapters are particularly harrowing, as the joint protagonists experience the first short period of time after Andy’s death. For anyone who has experienced deep loss, there will be an uncomfortable level of identification with Belinda’s and Evelyn’s emotions – and lack thereof.

It’s an interesting technique to show grief from two perspectives that really only interesect at the book’s opening and close. For Belinda, there is the loss of an expected future along with the loss of her fiancé. For Evelyn, there is the realisation of lost opportunities and the gradual understanding of the changes wrought in her after the years-earlier loss of her husband, Andy’s father.

The rest of Free-Falling‘s cast slowly gathers as the book progresses. While Andy’s identical twin, James, remains a little undefined due to his being seen through Belinda’s and Evelyn’s eyes, Bazza definitely emerges as a likeable and sympathetic character. If anything, he’s a little bit too good to be true!

The greatest strength of Free-Falling, however, is how real it feels. Perhaps things tie in a little too neatly at times, and it is true that there is a level of near-melodrama to a couple of the events and developments, but the characters are very realistic, as are the emotions that they experience. I particularly enjoyed the fact that Belinda and Andy’s relationship is portrayed as being flawed. The glimpses that flashbacks afford of him explain Belinda’s love for him, while not making their love out to be something unique and perfect – and therefore unbelievable.

Free-Falling is a very solid debut and one that should establish Moriarty as a rising Australian author. Although focussed upon two women, it should resonate with anyone who has experienced loss and the conclusion allows for enough hope that the reader is not overwhelmed by the sometimes-depressing content. I look forward to seeing what Nicola Moriarty produces next.