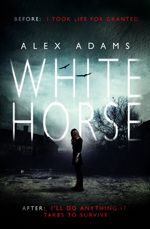 I’ve been reading a lot of YA dystopian and post-apocalyptic books recently, so it was a nice change to pick up a more adult example of the genre. The trouble with writing for a teen audience is that you have to hold your punches a little when it come to the more horrifying aspects of a universe, whereas Alex Adams has been able to show the consequences of war and mass death with true clarity.

White Horse flits back and forth between present action and the past events that led to humanity’s demise. It’s a slow way of revealing the universe, but also a clever one. The reader is allowed to speculate upon events and to enjoy the gradual reveal, while the action of the present ensures that the novel remains a gripping read. I’m not sure it’s a technique that I would choose as a reader, but Adams carries it off well and I quickly adapted to the format.

Zoe worked well for me as a protagonist. She’s not superhuman, which I found important. The things she manages to do are prompted and powered by the survival situation she finds herself in, and her reactions generally feel realistic. Some secondary characters worked better for me than others. I found Nick quite likeable, although he was tainted somewhat for me by his enormously unprofessional and unethical pursuance of Zoe. Morris is a welcome presence during her parts of the novel, equal parts efficiency and warmth. Lisa, however, I was less convinced by. She reads a lot younger than her stated age and, for a character who is present for much of the book, I never felt like I got to know much about her. Instead, she seemed a personification of weakness and stupidity, with a large touch of shallow thrown in!

The Swiss is an interesting villain, if perhaps a little too obvious a one. I am not entirely sure about the reveal at the end, in terms of how it will sit with a group of often-maligned people (sorry, to say more would be an immense spoiler), but he is certainly a worthy – and creepy – opponent for Zoe.

White Horse itself, the disease that ravages human kind, is creative and interesting and raises all manner of questions about humanity and evolution and the costs of survival. There is a slightly paranormal feel to the effects of the disease, but it is much closer to horror than it is to the current glut of paranormal romance!

Given its genre, it’s interesting that White Horse makes such heavy use of figurative language. The vast amount of metaphor, simile and personification meant that I struggled a little to get past the language to the plot. I was heavily reminded of Mafi’s Shatter Me in this regard. There is a lot of pretty language, but it often seems to lack authenticity on the page.

Like most books seem to be these days, White Horse is the first in a trilogy. As much as I’m tiring of this phenomena, I appreciated the fact that White Horse felt complete as-is. Readers will not have to wait until the final novel for the resolution to conflicts introduced in this one. In fact, I am left wondering what other stories the trilogy will have tp tell, so I shall be very interested to see where Adams next takes her broken world. I found the ending to White Horse a little abrupt and easy, so perhaps that was a hint that there is more to come.

White Horse is a fast-paced and enjoyable read, with a clever concept and a likeable protagonist. It should be well-received by fans of its genre.