For someone who grew up in Australia, I have read very little about the Eureka Stockade. I’m sure I would have been shown the location while on a grade five school camp to Ballarat, but I have much stronger memories of dressing in period costume at Sovereign Hill and learning to write on a slate. Miners’ rebellions over such dull things as taxes just don’t rate with children, it seems.

The Forgotten Rebels of Eureka, therefore, is the first in-depth account of the Stockade, and all of the events—major and minor—that led up to what occurred in Ballarat in December 1854. It’s very well suited to me, too, as the focus is largely on the women of Ballarat, and it is a social and political history, rather than a military history of events.

Clare Wright’s writing style is contemporary, informal, and often poetic.  She makes extensive use of quotes from diaries, letters and newspaper reports, so that the words of the people she’s talking about occupy almost as much space in the book as do her own. The formatting of the ebook edition I read made it difficult to distinguish block quotes from standard text, which was unfortunate and occasionally confusing, but I very much appreciated Wright’s commitment to allowing her subjects to speak for themselves where possible.

There is a lot of information here, so the book does feel very lengthy, and I found the first part less engaging than the latter parts, which were more focused on Ballarat itself. This isn’t a primer, but rather a collection of voices that is obviously the end product of an enormous amount of research.

I’m still not an expert on miners’ rebellions, but I come away from reading The Forgotten Rebels of Eureka knowing a lot more about the people involved with this rebellion in particular, and having a greater sense of why the Eureka Stockade is so often considered an important event in Australia’s history. 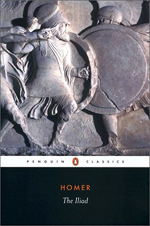 I have a confession to make: I have a Masters in Ancient History but this is the first time I’ve read The Iliad in its entirety. And now for another confession: I really didn’t like it as much as I feel I should have.

I enjoy The Odyssey. Odysseus rocks and I’ve always had a major soft spot for Telemachus. So it’s not that I have anything against Greek epic… just THIS Greek epic. I don’t know how much of it was the translation and how much was the work itself, but I just wasn’t interested most of the time.

Ultimately, I think this just confirms something that I (and all those who know me) have known for years: Rome > Greece in my little corner of the Classics.