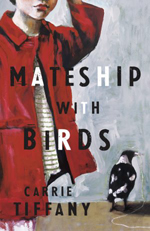 Mateship with Birds is a lyrical, calm novel set in rural Australia. There is a strong contrast between the beauty of Carrie Tiffany’s writing style and much of the content of the book. The elegance of her prose, along with the regular insertion of blank verse, serves to emphasise the harshness of life in the country and the mortality of beasts. Here, humans are unmistakably shown to be animals themselves. The mating and family life of the kookaburras that Harry watches mirrors the slow courtship between him and Betty, and between Betty’s son Michael and his girlfriend Dora. Likewise, the deaths of the men that Betty looks after at the local nursing home are spoken of in the same perfunctory manner as the deaths of the birds that Little Hazel’s class looks after at school. It is a comparison that should possibly feel confronting. Instead, it is simple and natural – in keeping with the flow of words and time over the book’s pages.

An interesting stylistic choice with Mateship with Birds was made with the decision to include multiple sections of blank verse. These sections focus on the life of a family of kookaburras, rather than that of the forming family of Harry and the Reynoldses. Other sections of the novel are devoted to Harry’s reminiscences about his early experiences with sex and sexuality, in the form of letters he writes to Michael – his clumsy (and sometimes inaccurate) attempts at educating the boy about the mechanics of sex and the curiosities of the female body.

There is a distance to Tiffany’s style that results in a similar distance between the reader and her characters. While I was sympathetic to Harry, Betty and her children, I felt a lot like I was observing them from afar, much as Harry observes his birds. This degree of removal, however, does not adversely affect the more unpleasant events and descriptions within the text, which retain the power to produce feelings of sadness or disgust. The four most difficult scenes all centre upon the one peripheral character – Mues – leading me to tense at the mere mention of him by very early in the book.

I think, in some ways, I am too sensitive a reader for books like Mateship with Birds. There is a bleakness here that I struggled with, and the constant tide of animal death is something that never sits well with me. The novel also contains an incident involving sexual abuse (via exposure) of a child, along with animal abuse (including bestiality). For these reasons, I would hesitate to recommend this work widely. It’s a book for readers to consider on a personal basis. The language is lovely, but the content may prove too gritty for many people.

Mateship with Birds is artfully written and a very strong work of Australian literary writing. While its content was not always in line with my reading preferences, Tiffany’s use of language was a delight to experience.

(Warning: contains scenes that readers may find upsetting, as detailed above)