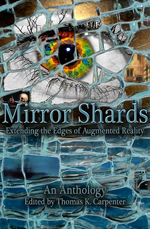 Mirror Shards: Extending the Edges of Augmented Reality is a science fiction anthology comprising thirteen short stories by new and established authors. Augmented reality, for those readers who are looking a little confused right now, deals with the idea of using technology to expand upon (augment!) the real world. Think GPS, but implanted into your eyes. The authors of the collected stories, however, have envisioned the implementation of augmented reality in a broad spectrum of ways, ensuring that readers will not grow bored as they make their way through the analogy.

“El Mirador” – Alex J. Kane
A tale of a tech-filled bounty hunter on the trail of a murderer. The second person narrative in this piece unfortunately made it difficult for me to get into it.

“Music of the Spheres” – Ken Liu
An engaging and thought-provoking exploration of the creation of disability through technology that is not available to everyone.

“These Delicate Creatures” – Melissa Yuan-Innes
The use of tech-enhanced theatre as political dissent is the focus of a clever tale of family and priorities.

“Bellow the Bollocks Line” – T D Edge
A short, but well-imagined, tale of a society in technological overload.

“The Sun is Real” – George Page III
One of my two favourites from the anthology, this piece looks at the use of augmented reality in a prison situation.

“A Book By Its Cover” – Colleen Anderson
One of the two definitely-not-for-young-readers stories in the compilation, this is a creepy tale of immersive entertainment and a woman who wants to be a part of it.

“Of Bone and Steel and Other Soft Materials” – Annie Bellet
An artificially-sighted woman takes on a boy’s kidnappers. A much better story than the title led me to expect!

“Witness Protection” – Louise Herring-Jones
In a futuristic version of the police-based crime story, a new spy device falls into the wrong hands.

“Gift Horses” – Karen Able
In this story, North America is controlled by OverSight, an augmented reality technology manufacturer. Unfortunately, I was left wanting more, as the story seemed to end just as it started getting interesting!

“The Cageless Zoo” – Thomas G. Carpenter
My other favourite, this piece is reminiscent of Jurassic Park. A family attends a futuristic zoo where predators are held through augmented reality instead of cages. Of course, something goes wrong.

“More Real Than Flesh” – Grayson Bray Morris
The other not-for-minors story in the compilation, this piece looks at the sex industry in the future.

“The Watcher” – George Walker
This engrossing piece tells of a DisneySub caught in border skirmishes between India and Pakistan. I felt that this story could easily be used as the basis of a much longer work.

With Mirror Shards, Carpenter has managed to put together a satisfying collection of science fiction writing that comprises a pleasing range of topics, ideas and literary styles. A professional and interesting anthology, it should be enjoyed by both regular readers of speculative fiction and those who like to dabble from time to time. 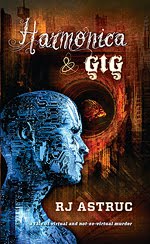 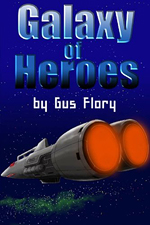 Galaxy of Heroes is set in the distant future – a future where the human race is scattered far from Earth and under the constant threat of violence and extinction from the more powerful inhabitants of the universe. It focuses around the experiences of four main characters who share a common history and who meet again as the action unfolds.

The most memorable of these characters is easily the larger-than-life Captain Jace Spade and this is ultimately his story. He’s not completely likeable, but that makes him more realistic. The other character of note is Genie, a cyborg created to be irresistible to men. Through her, interesting questions of futuristic ethics are raised; the idea of a sentient, albeit manufactured, creature being programmed for sexual and romantic slavery is a difficult one.

In the end, however, the strong point of this novel is the story itself. Flory is not the most elegant of writers, and there are places where a little further editing could have improved the flow of the writing and reduced unnecessary repetition, but there is no question that he can tell a gripping tale. Galaxy of Heroes is almost solid action from start to finish, and there was no point at which I felt bored by what I was reading. The universe that is created within this book’s pages is clever and well fleshed out, and the descriptions of battle are excellent.

I hope Flory goes on to write more – perhaps even more in this very universe. I, for one, would be glad to read it.

(I received a copy of this book from the author in exchange for an honest review.)