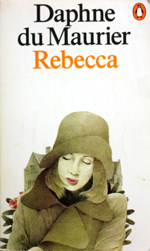 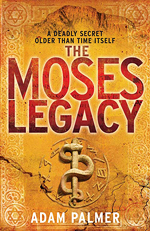 Ancient languages expert Daniel Klein is called in to help when his old acquaintance, archaeologist Gabrielle Gusack, discovers a collection of stone fragments, covered in Proto-Sinaitic script, on an Egyptian dig. A routine academic expedition, however, soon turns into a treacherous physical and intellectual journey encompassing several countries and thousands of years, with a dangerous assassin close on Daniel and Gaby’s trail.

The Moses Legacy is a historical/religious conspiracy thriller in the vein of Dan Brown’s popular bestsellers. Like Brown, Adam Palmer is a storyteller and a suspense-weaver, rather than a writer of high literature, but this does not detract from the reader’s overall enjoyment of the novel. Indeed, Palmer reveals a solid grasp of the technical skills necessary for his chosen genre. The Moses Legacy is fast paced and its historical mysteries are engaging, while the action of the novel helps to break up the passages of religious and historical explanations with enough danger and excitement to keep less history-focussed readers entertained.

As a protagonist, Daniel Klein is a well-rounded character, but he doesn’t feature the annoying perfection that so many leads succumb to. I think Palmer did well to make Klein Jewish, because it links him with the setting and the story through more than just his academic specialty. In contrast, Gusack is a little one-dimensional. This is largely due to the fact that she is generally seen through Klein’s eyes, but it would have been nice to learn a little more about her. As a villain who is really little more than a henchman, Goliath fits the general archetype. The reader learns of his motivations, but is not given the chance to really sympathise with him.

Ultimately, I think Palmer delivered exactly what I was expecting from The Moses Legacy. It was a fun read with an interesting mystery to unravel, but it’s not the kind of book to change the world or significantly affect its readers. And that’s okay. It’s entertaining and attention-holding and the perfect read for a plane ride or the everyday commute. 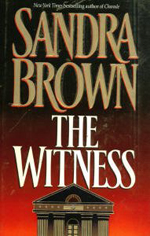 I was expecting The Witness to be a legal drama or a whodunit-type novel, so was very pleasantly surprised when it turned out to be more of a thriller. From the very beginning of the novel, the reader is introduced to the intriguing mystery surrounding the protagonist of the story being on the run. As the book unfolds, the truth is slowly revealed, with just enough left in the shadows to keep the reader turning those pages, wanting to find out what happened as well as what will happened. The combination of flashbacks and chapters set in the present worked well for me, although the change of character POV confused me a couple of times.

This is an enjoyable novel that is just perfect for holiday reading, as it’s an easy read but has some real substance to it. I’ll definitely be reading more of Brown’s work – and not only because I have two more books already sitting in my shelves!