Recently, I embarked upon my first Dungeons & Dragons campaign, along with my wife and three good friends. I was arrogant/foolish enough to put up my hand for the role of Dungeon Master, which I’ve found to be both extremely labour-intensive and extremely rewarding. Because I am not one to do things by halves, I’ve been creating a homebrew world for the players’ characters (PCs) to move within, although I’m sticking as closely as possible to the 5e rules, and basic (Player’s Handbook, Dungeon Master’s Guide & Monster Manual) races, classes and monsters.

I don’t consider myself a spontaneously imaginative person. I generally describe my creating process as picking up my mind and thrusting it at a question I want to answer or a person/place/situation I want to invent. Because of this, the highly improvisational nature of D&D doesn’t come naturally to me. I feel quite at home while doing hours of world building, when I can work at my own (slow) creative pace, but when I’m actually sitting at the head of the gaming table, I am far from my comfort zone. The role of a good Dungeon Master is to facilitate a story that the players create, which means coming up with non-player characters (NPCs) and locations on the fly and responding to the in-game questions, actions and motivations of the PCs. It’s not something that comes naturally to a person who likes to have everything in life thoroughly scripted-out in my head before I encounter it!

At this point in the campaign, the PCs are only at level two and are thus very squishy. This means that I have an excuse to script things out a little more than would usually be appropriate for a campaign. Right now, I need to make sure that I don’t accidentally kill the entire party with an overpowered random encounter, so a lot of the play has been introducing the characters to the campaign via a limited chunk of the universe. Centring things on one small town has allowed me to create NPCs ahead of time, so that the improvising was at least guided a little by point-form character traits.

Soon, though, the adventurers will be strong enough to venture forth into the greater world, and this will prove the real challenge for my nascent improvisational abilities. I’m hoping that I can continue to overcome my insecurities about acting and storytelling, because I think it’ll be a great learning experience, as well as a super-fun social experience, if I do.

Every year, I compile a list of the various forms of media I’ve consumed, along with a few other important details about the year in review. Previously, I’ve published this on Dreamwidth/Livejournal, but one thing I’ve come to realise this year is that those types of blogging are now firmly in my past. So here’s my 2018 in review: WordPress-style.

END_OF_DOCUMENT_TOKEN_TO_BE_REPLACED My piece “In Dreams” was published on the 25th of September and can be read online for free at Zetetic: A Record of Unusual Inquiry. It’s an older piece of mine and somewhat different to my current style, but I’ve always been rather fond of it, so I’m very glad that it’s found a good home.

In future publication news, I have a science fiction piece, “Women’s Work”, expected to be in the December edition of the Andromeda Spaceways Inflight Magazine. More details when it eventuates.

Writing-wise, I’ve just completed the first draft of a sword & sorcery short story, which is currently nameless. I hope to have it named, edited and out on submission before I head to Canada next month.

(Yes, I am going to Canada for the first time! I shall be staying with my best friend and her family and–very importantly–her cats.)

I’ve been meaning to learn how to sew for ages, because most of the clothes I want to wear stopped being made at least sixty years ago. I have time and a need for activities at the moment, so I decided it was about time I did something about it. I tried to photo-document the process as I went along, courtesy of my phone camera, but I admit I got into the actual sewing a bit much towards the end and forgot about the photos a lot of the time. 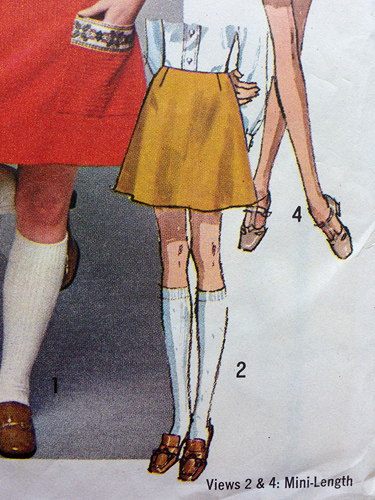 So this is what I was trying to make. It’s from a 1970 Simplicity pattern, and it’s your basic 60s-style A-line skirt. A-lines are great because they’re flattering to almost everyone and good for both casual and business. So the perfect pattern to make again and again if it turned out well.