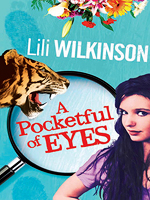 I’m amazed that there aren’t more Young Adult mysteries out there. It’s such a well-loved genre when it comes to junior and middle grade fiction, what with the massive popularity of the Enid Blyton mysteries and series such as Trixie Belden, Nancy Drew and the Hardy Boys, but then there’s a real hole in the market in the section between those books and their adult counterparts. I was excited, therefore, to discover A Pocketful of Eyes. I knew of Lili Wilkinson from her excellent Pink and was very pleased that she had produced an Australian, Young Adult take on the murder mystery.

Just like the stories that are regularly referenced in the novel, A Pocketful of Eyes is great fun. There’s an ever present sense of its place in the world of the whodunnit, but Wilkinson is also aware at all times of her audience. There’s no stuffy Poirot here. The protagonist, Bee, is just as keen a detective as her literary ancestors, but she’s also very much a teenage girl. Her sleuthing is often derailed by her growing crush on her sidekick, Toby, and she has her geeky mother and her new boyfriend to deal with as well.

I knew I’d love A Pocketful of Eyes from the moment that it started talking about Bee’s childhood obsession with Trixie Belden. I, too, wanted to be Trixie when I grew up, and I received far too much pleasure from the references to her and the book series throughout the novel. I have to wonder whether Wilkinson was also a big childhood fan of junior mysteries, because they are all spoken of with such love.

The mystery itself is nicely paced and cleverly constructed. While I picked up on the murder weapon reasonably early in the piece, due to the various hints given in the pages, I had not predicted the other details of the death at all, which is always good. (To be fair, I am not the type of person who tends to think a lot about whodunnit, preferring to let things unfold at the author’s pace.) As with most books in the genre, the reader has to suspend disbelief a little, but I think that’s part of the fun of mysteries. There’s an escapist element to lay detectives that really appeals to one’s own, personal sense of potential adventure.

I wasn’t sure what to expect of A Pocketful of Eyes, given the aforementioned lack of YA mysteries, but was very pleased to find that I enjoyed it very much. I’d love to see more books about Bee, or at least a few more whodunnits from Lili Wilkinson.

Review: How To Be A Vampire – Katy Hall