Review: Across the Universe – Beth Revis 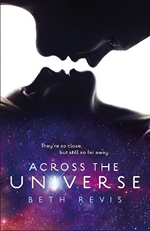 When Amy agrees to accompany her parents to a new life on a new planet, she expects to wake up there in three hundred years’ time. But then, fifty years before their planned arrival, she is woken from her cryogenic slumber and almost killed in the process. With her parents still frozen, she feels overwhelmingly alone. Can she trust Elder, the ship’s leader-elect – and can Elder trust everything he’s ever known?

Across the Universe combines two things I love – science fiction and a dystopian society – so I was pretty much fated to enjoy it. I’m a sucker for books that are set in space, and this first novel in a trilogy combines the spaceship location with an intriguing mystery that kept me reading with interest right through to the end of the book.

The narrative of Across the Universe is split between the perspectives of Amy, who grew up on Earth, and Elder, who was born and raised on Godspeed and is destined to be the ship’s next leader. Amy feels very real for a teenager who has been thrust into circumstances she didn’t choose, without the support of her family or the friends and boyfriend she left behind on Earth. Her feelings of displacement and loss are well-portrayed and her determination to understand her new world helps her to be a likeable character. At times, I wished for a deeper insight into her personality and past, but it is likely this will eventuate later in the trilogy.

While Amy is easy for the reader to identify with, Elder is less familiar a character. Despite this, it was he whom I found the more interesting and enjoyable of Beth Revis’s two protagonists. The development of Elder over the duration of the novel is very well done, and his struggle with the conflict between the truth that he’s always known and the protests of his conscience is cleverly described.

The book’s supporting characters were generally enjoyable as well. Eldest is overbearing and rather sinister from the beginning, while I never entirely knew how to feel about Doc. I was a little disappointed that we didn’t get to see more of Harley, because I liked what we did get to see, but didn’t learn quite enough to truly feel for him.

One thing I really enjoyed about Across the Universe was the lack of romance. I love YA romance, but sometimes it’s nice to have a book from a non-romance genre that doesn’t feel the need to make love a focus. While I realise that this won’t be the case for the whole trilogy, for this book I enjoyed being able to concentrate on the science fiction, dystopian and mystery elements of Revis’s world without having to dodge a love triangle to do so!

My main issue with Across the Universe was the fact that I found the chapters dealing with Amy’s dreams and thoughts while frozen dull and repetitive. It reached the point where I was just skimming them, and I feel like one short chapter could have given the same impression without detracting so much from the more interesting Elder chapters in between the Amy ones.

Although Across the Universe is the first book in an intended trilogy, it stands apart from other recent books in that, while there are some questions left unanswered, it nonetheless feels like a complete novel without the need to read the next two books. The main plotlines are all resolved and it is the universe that entices the reader to continue with the trilogy, not one of the oh-so-fashionable cliff-hangers that always leave me feeling like I’ve paid for a product that isn’t complete.

Across the Universe is a solid sci-fi addition to the young adult market.

Review: Notes to Self – Avery Sawyer