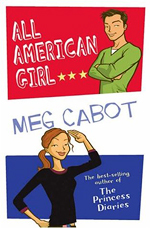 I’ve never read any of the Princess Diaries books. My library never has the first one in, and the movie put me off them a bit, because Anne Hathaway bugs me, and I’m exceedingly shallow. So I think All American Girl might be the first full-length Meg Cabot book that I’ve ever read. I picked it up at a library book sale, expecting it to be a light and fluffy read that I could then pass on, but I was pleasantly surprised at just how much I enjoyed it. It’s a clever and fun contemporary romance, which I shan’t be giving away after all!

Sam is an enjoyable heroine, who has a strong personality. My favourite part about the novel was the way that she grows throughout its pages, learning to see the world and the people around her in a more mature way. Although All American Girl is not strictly a coming-of-age story, there is still a great deal of character growth shown here. Sam’s art lessons, and her struggle to paint what she sees, instead of what she believes she knows, form a perfect metaphor for her parallel reassessment of her family, her long-term crush, and the other people in her life.

I can’t stand the phrase “Leader of the Free World” as a synonym for “American president”, because the US president is not my leader, thankyouverymuch. It’s used multiple times in All American Girl, but I get the impression that Cabot uses it ironically, given the way she portrays the president and his actions. If so, it’s another example of the clever writing and characterisation that makes the novel stand out a little from the crowd of contemporary romances.

Speaking of the romance, it’s also nicely done. There’s a love triangle of sorts, but only in the sense that Meg is torn between her long-held “love” for Jack (her older sister’s boyfriend) and the “frisson” between her and David. I particularly enjoyed the way that Jack’s character failings are never specifically detailed, but rather the reader is allowed to form their own conclusions from his behaviour.

All American Girl is, indeed, fluffy teen romance, but it’s a strong example of the genre. Perhaps I should try the Princess Diaries after all!