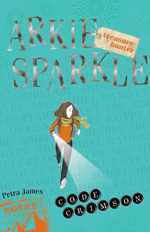 I was sold on the new Arkie Sparkle, Treasure Hunter series the moment I read that it involved archaeology and a treasure hunt that spans all seven continents. I’d have been all over these books as a kid, and they hold a good deal of appeal for me as an adult, as well. So many books aimed at young girls seem to take femininity to extremes. There’s a place for fairies and princesses and pink satin dresses, but when I was that age I wanted to read tales of great adventure, with female protagonists who solved mysteries and climbed mountains, instead of waiting around to be rescued by a prince.

Code Crimson is just that kind of novel. Aimed at ages seven and up, it’s a chapter book with fun illustrations, handwriting-font interjections and additional information such as the NATO phonetic alphabet. There’s even a short factual section at the end of the book, which gives just the right amount of information about the real people and archaeological finds that formed the inspiration for the book’s action.

The action itself is very fun, with Arkie and her cousin heading off to Egypt in the family supersonic jet in order to hunt treasure and eventually achieve the return of Arkie’s kidnapped parents. If the jet isn’t exciting enough for young readers, the treasure hunters are also equipped with time travelling technology and umbrellas that act like helicopters – plenty of gimmicks and gadgets to add a strong science fiction element to the adventure plot.

Although it’s only a short tale, as you’d expect for the audience it’s aimed at, Code Crimson manages to fit in a lot of action and does a great job of introducing the series’s main characters without it ever feeling forced. I think the Arkie Sparkle, Treasure Hunter books will prove a hit with young readers – and the low price point of the first book should prove just as pleasing to the parents who will be buying it!