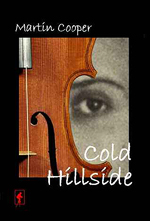 When Simon Contraine’s brother, Giles, is killed in a car accident, he returns to the farm where he grew up to grieve and take stock. But there seems to be something suspicious about the death, a fact seemingly confirmed by the interest a detective inspector takes in the accident – and in Simon himself. As Simon learns more about his brother’s life, he finds himself drawn into a situation deeper and more dangerous than he ever could have expected.

Cold Hillside is the kind of book that demonstrates just why self publishing is beginning to really take off in the current publishing climate. With the bigger publishing houses currently focussing on genres and ideas that are proven best-sellers (the Dan Brown-style thriller, the supernatural teen romance), there is little room for books that deviate from the fashions of the moment. Self publishing allows books like Cold Hillside, which don’t fit so easily into genres and sales patterns, to find a readership. And this book deserves a readership.

Martin Cooper is a very capable writer with an easy, literary style. He has an obvious flair for description, with his locations all being so well-sketched that it is impossible not to envision them in your mind while reading. Cold Hillside employs regular flashbacks to flesh out its backstory, and these are integrated in a skilful manner, so that the reader rarely struggles to identify the time-period of each section. I think that this fragmentary style works perfectly for the story that Cooper has chosen to tell. There is an air of reminiscence that is important for the reader’s understanding of Simon’s loyalty to and love for his brother, especially as more and more of Giles’s life is revealed.

One thing that didn’t work as well for me, however, was the use of tense changes to indicate flashbacks. It didn’t feel entirely consistent to me and I think I would have preferred if the time changes were indicated solely through the content – which does an excellent job of signposting this without the need to do so through tense as well.

The plot of Cold Hillside is extremely engaging. From the very beginning of the book, I found myself caught up in the mystery of the story, becoming only more enthralled as the story progressed and the true depth of Giles’s dealings began to become known. While, at times, the literary style of the novel can detract a little from the feeling of urgency that I would usually associate with a crime novel, the plot kept me interested from start to finish.

Giles is a cleverly-drawn character. A good amount of skill is needed to combine the shown aspects of his character in a way that feels genuine, and Cooper succeeds totally when it comes to this. Bridie, too, is well-characterised. She is likeable and impulsive and works as a good foil to Simon, providing energy where sometimes he seems to lack it. Indeed, as a protagonist, Simon often felt a little too understated. By the end of the book, I still felt unsure about who he really was. We learn of his career and his parts, but he remains at an emotional distance from the reader, which is unusual given the first-person perspective. A lot can be revealed of Simon through the people around him – but there was a sense of disconnection for me nonetheless.

Such things, however, detract little from what is an interesting and well-written novel. Cold Hillside combines crime and family loyalties with a touch of music – and does so with style and genuine skill.