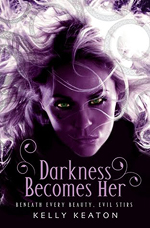 Ari’s silver hair and teal eyes have set her apart as different for as long as she can remember. So, when she follows the path of her long-dead birth mother to New 2, the city rebuilt from the hurricane-devastated ruins of New Orleans, and discovers that being different is the norm there, she feels at home. But there’s still the question of why her mother killed herself and why a mysterious hunter tried to kill Ari. Who is after Ari and, in a city of supernatural beings, is she the most abnormal one of all?

Darkness Becomes Her has a solid beginning. The reader is thrust straight into Ari’s life, discovering the fate of Ari’s mother and learning of the childhood that Ari has experienced. We are given reasons for her physical and emotional strength and for her fighting abilities, which is a nice change from the many books that expect their audience to believe that a previously untested protagonist can prevail in a fistfight or firestorm

As the book progresses, we are introduced to New 2. I loved the slow reveal when it came to the novel’s key setting. New 2 is wonderfully described, and I rarely found myself without a picture in my head when I was reading about the various locations that Ari visits.

Another positive for me was the general plot of Darkness Becomes Her. I enjoyed the focus on Ari’s quest to discover both the circumstances of her birth and the truth behind her own identity. Details that do not immediately seem important are eventually shown to be tied to the history of Ari’s family and the identity of her new-found adversary.

Despite its good points, however, Darkness Becomes Her didn’t quite work for me as well as it might have done. Firstly, Ari’s complaints about her freakishness never rang true. She has beautiful hair that attracts men and teal (ie. not-so-very-peculiar) eyes. As physical differences go, she’s not exactly Hank McCoy. Secondly, the romance is sudden and completely without justification. It made all of the love-at-first-sight, destined-to-be-together plot lines sound ultra-realistic in comparison. To me, it almost felt like Keaton’s story hadn’t originally included the pairing but, rather, it had been inserted at a later point to satisfy the current fad for paranormal romance.

The biggest issue for me was actually an aspect of the book that has been much appreciated by other readers. Warning: spoilers follow.

Combining the latest big thing – Greek mythology – with other forms of the supernatural just didn’t work for me. It was too busy. I was fine with the revelation that New 2 was ruled by a council of vampire, shifter and witch families – although even that was pushing it a little bit – but discovering that gods and monsters from Greek myth were also a part of the fictional universe just felt like overkill. If Keaton had chosen one or the other sandbox to play in, I think Darkness Becomes Her would have worked a lot better for me. As it is, I won’t be actively seeking out the sequel, although I’d possibly pick it up if I noticed it in the library, if only to see what happens to Violet, who is easily my favourite character.

Despite these issues, however, I still found Darkness Becomes Her an interesting read.