Review: Does My Head Look Big In This? – Randa Abdel-Fattah 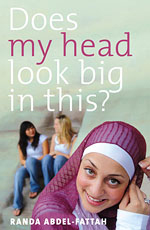 Regardless of its contents, I think I’d have considered this book worthwhile simply because of how great it is to see a YA book with the covergirl wearing the hijab. I can’t even begin to comprehend just how invalidating it must feel for so many teenagers to head to the YA section of a library or book shop just to be faced by cover after endless cover of white, skinny models with no indication whatsoever of cultural or religious diversity. (And I am not going to go into the whitewashing of characters by publishers or film-makers here, because it’s all just too depressing and anger-making.)

I have to say, though, that my hopes for Does My Head Look Big In This? weren’t entirely met. I think the main issue for me was that it felt extremely fragmented. It was like the author wanted to deal with a hundred different plot points and, instead of choosing a few to concentrate one, decided to put them all in. Because of this, everything felt a little shallow and unfinished. There was so much room for conflict and resolution in many of the plot points raised (for example, the whole Amal/Adam storyline, which gave a wonderful opportunity for Amal to confront temptation and examine the reality of her choices, but instead just kind of flopped), but even the dramatic story surrounding Leila and her family felt rushed and a little forced.

In the end, this meant that I liked this book a lot more for what it represents than what it actually is. I think it’s so very important that teenagers of all races, cultures and religions feel represented in mainstream fiction. As a work of fiction, however, it left me feeling decidedly apathetic.