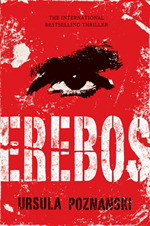 I’ve been keen to read Erebos since first hearing about it at the Publishers’ Showcase at the State Library late last year, so I was thrilled to get my hands on an advance copy. I had rather high expectations for the novel, given that a young adult thriller centred around a computer game seemed right up my alley. Luckily, my expectations were met and possibly even exceeded.

There are a lot of things that make me feel like playing video games, but reading isn’t usually one of them. Until now. With Erebos, Ursula Poznanski has created a real page-turner of a thriller where, along with the strong urge to continue reading, there is also a temptation to put down the novel in order to play a game yourself. The gameplay inside the novel is so well described, however, that it feels a lot like watching a friend play, which takes care of the cravings while the reader devours the book!

On the most basic level, Erebos is a book about a computer game. In fact, a good amount of the text is devoted to describing Nick’s in-game journey as Sarius. These sections are written in the present tense, as opposed to the rest of the book, which employs the past tense. In addition, they are told from the perspective of Sarius, rather than Nick, which further distances them from the rest of the text, allowing the reader to become immersed in the game itself.

As a protagonist, Nick grows on the reader as the book progresses. At first, he seems a little whiny and rather foolish, and he, like many of the novel’s characters, is negatively affected by the game’s addictive quality. He is not without growth, however, and by the end of the book he has becoming a likeable character, due in part to the influence of Emily and Victor, as well as his own experiences with the game.

Initially, I found Emily a little flat as a character, but she is fleshed out more as Nick has further contact with her, and she ends up being one of the strongest characters in Erebos. In contrast, I struggled a little with the characterisation of Brynne. We are told that she is not likeable, but never really shown it, so Nick’s constant negativity towards her and callous dismissal of her obvious feelings for him can feel very uncomfortable at times.

Really, though, the key supporting character in Erebos is the game itself. Poznanski has created a game that reads very much like the roleplaying games that will be familiar to so many readers and has then infused it with a deeply sinister element that gives the novel its edge. The escalating real life tasks asked of the game’s players are cleverly constructed and the portrayal of addiction is very well done. I think Poznanski did an excellent job of explaining why a group of teenagers could find themselves so deeply embroiled in circumstances they never would have considered before playing the game.

I personally loved Erebos. It is a well-paced thriller and an interesting exploration of human nature. It is also a book about gaming, and it was the combination of these two elements that made me enjoy it so much. I do wonder whether it would hold so great an appeal to readers who are not familiar with (or who are unimpressed by) the world of video games. I can imagine that the in-game sequences, at the very least, may be a lot less enjoyable.

Beyond this limitation, however, I think that Erebos should have a very wide appeal. Although it is marketed as a young adult novel and most of the characters are teens, I think that it would be equally suited to adult readers. It is an exciting and clever novel that well deserves the amazing sales that it has achieved in Europe.