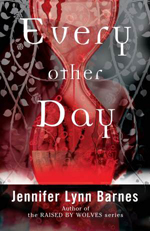 Every Other Day is the very best kind of escapist reading: the type that doesn’t require you to check your feminism – and brain – at the door. Sure, there are a few things here that ask the reader to suspend disbelief for a moment, but it’s paranormal fiction, and it’s no more than you’d expect.

The first thing that struck me about Every Other Day was the fact that this isn’t a novel set in the future. Instead, it’s a present-day alternate universe, with most things left unchanged from what we know. The big difference is that preternatural creatures have been a known part of the world since Darwin’s famous voyage. Our introduction to the book’s protagonist, Kali, sees her hunting hellhounds, and creatures such as dragons, basilisks and zombies also play their role in the novel. I found this AU very clever, and enjoyed it as a change from the usual paranormal settings.

Kali is great. She’s not entirely human herself, and doesn’t understand why or what she is, but that doesn’t stop her from doing her best to keep the true humans around her safe. She’s accused of having a hero complex, and that’s very much the case, but it’s always refreshing to have a female protagonist who’s strong and independent, even if the latter quality does tend to irritate her new-found friends.

Speaking of those friends, Skylar and Bethany add two more fantastic female characters to the mix. Bethany is popular and seems to be your typical mean girl at the beginning of the book, while Skylar is an outcast, who is “a little bit psychic”. Kali resists their offers of help but they pay little attention, meaning that Every Other Day boasts a cast of three likeable, active and three-dimensional female leads. If you’ve read a lot of teen paranormal fiction, you’ll know how big a deal that is.

In another move away from the standard, there is a complete lack of love triangles, controlling boyfriends or, indeed, anything but the slightest hint of romance in Every Other Day. This is not a paranormal romance. It’s straightforward paranormal fiction, with an action-filled plot and pleasing sides of character development, growing friendships and family dysfunction. And it does it well.

My only gripe with Every Other Day was the fact that I found it a little hard to get into, initially. Once the setting-up chapters were over, however, and the main plot began, I had no more reservations. Every Other Day is enjoyable, creative and packs an emotional punch. Recommended for fans of Buffy and strong female leads.