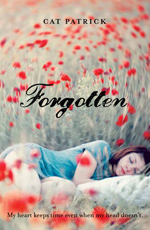 Forgotten is based around a paranormal premise – that protagonist London can only remember forwards, instead of backwards like normal people – but nonetheless reads a lot more like contemporary fiction a lot of the time. London’s memory issues are always central, but there’s also a strong focus on family, romance and the mystery surrounding why London is the way she is.

With a protagonist who cannot remember anything about her past, Forgotten could have easily felt a little distancing, but Cat Patrick made the clever decision to keep London’s personality strong and constant, despite her needing to rely upon notes to feel her way in the world. I would have liked it if London had a few more people around her from her age group, as her complete reliance upon Luke for peer interaction isn’t very healthy, but I do understand that her condition would naturally make it hard for her to maintain many friendships. London is confident, interesting and empathetic – its just a pity she succumbs to Bad YA Name syndrome. London Lane? Oh dear.

Although I’d have liked to see London possess a few more friends, there’s no denying the fact that Patrick has written an extremely likeable love interest in Luke. He’s extremely supportive of London in all of her ventures (and moods!) and seems not to mind the quirks that stem from her memory issues. He’s definitely right up there on the list of non-creepy YA boyfriends. If only that list were a lot longer!

The most important and interesting thing about Forgotten, of course, is the novel’s premise. Patrick has both come up with a great concept and managed to maintain it in a reasonably believable manner, despite the logistical nightmares involved in working out how to allow London to function near-normally in the world. I like that some aspects of London’s abilities are left a little undefined, so that the reader is able to decide for themselves whether things are exactly as London believes them to be.

Towards the end of the novel, things start to be revealed at an increasingly rapid pace, which meant that I was left feeling a little like I could have done with an additional fifty pages worth of book! Some of these revelations were better signposted and supported than others, emphasising the abruptness of the conclusion. Certainly, there is a lot of room here for a sequel, although the absolute ending of Forgotten works well and the book exists comfortably as a stand-alone offering.

Forgotten has a great premise and an interesting mystery and should appeal to paranormal and contemporary fans alike.