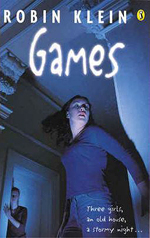 Patricia Miggs is excited when the two most popular girls in her new school, Kirsty and Genevieve, invite her to spend the weekend in the country with them at Kirsty’s aunt’s house. But things go steadily downhill when it becomes obvious that neither girl really wants her to be there. When strange things begin to happen in the house, Patricia assumes they’re all part of an elaborate prank, with her as the intended victim. But are Kirsty and Genevieve behind the games – or are they the work of a tormented woman who died in the house many years ago?

When I was in year seven,Games was the book to read. The queue to borrow it out from the school library was so long that I’m amazed the school’s copy didn’t fall apart by the middle of the year. For many of us, it was our first introduction to the horror/thriller genre. The Goosebumps series didn’t begin until the following year (and we were all too old for it by then anyway) and the Point Thrillers didn’t take off at my school until a year or two later. And we were scared by Games. It was so popular because it got to us in a way that most books didn’t.

Re-reading Games again as an adult, I was surprised by the way that the old feeling of spooky tension came flooding back to me. I predicted the ending quite early in the book, but that didn’t relieve the feeling of uneasiness as I read on. These days, I’m almost completely immune to horror due to absolute over-exposure, but there was a residual memory there that sparked into something when teamed with Klein’s excellent storytelling ability.

One of Klein’s strengths was always her characters. They had flaws and back-stories and more levels than might at first be apparent. Games is no exception. Certainly, none of the three girls are very likeable, but Patricia, at least, becomes more so as the book progresses and she begins to come into herself.

Klein teams excellent descriptive language with realistic teen dialogue to create a novel that is both appealing and well-crafted. It was a pleasure to re-read Games as an adult; I found that my enjoyment hadn’t been tempered at all by the passage of the intervening years.