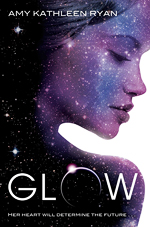 Waverly and Kieran are the oldest of the first generation of children born on the Empyrean, a ship half-way through its journey across the galaxy on a mission to colonise a new Earth. Happy and in love, their greatest concern is whether or not it is time for them to marry. But a sudden attack from their companion ship, the New Horizon, changes everything, and Waverly and Kieran find themselves torn apart – and forced to find the strength and conviction to become leaders in their changed and dangerous lives.

In writing Glow, Amy Kathleen Ryan has achieved something that few writers manage: she has put forward a novel that offers readers both enthralling action and an intelligent commentary on human nature and behaviour. Just as it is extremely difficult to put Glow down, it is also difficult to come away from reading this novel without thinking deeply about the events within its pages and the beliefs, motivations and manipulations that inspire them. Readers looking for something fluffy and mindless should look elsewhere; here they will find the darker side of humanity, in all its many guises.

One of the most commendable aspects of Glow is Ryan’s respect for her audience. She does not shy away from topics such as sexual assault, parental violence and loss, but rather paints a futuristic world that reflects the failings of our own, simultaneously adding to the authenticity of her universe and characters and acknowledging the ability of young readers to cope with darker literary content. Indeed, it is this frankness that helps give Glow the “crossover appeal” that is so greatly coveted in the YA publishing world. I would have no hesitation recommending it to adult readers; while the novel’s protagonists may be teenagers, its themes and ideas are ageless.

Glow focusses on two main characters, Waverly and Kieran, with the novel switching between their (third person limited) perspectives. Waverly is a fantastic character. She is strong in all the right ways, without ever feeling too capable to the point of being unrealistic. When she is rash, her behaviour is motivated by her feelings for the people around her, and she does not cope easily with the darker side of fighting back. Her interactions with other female characters are cooperative, and she has worth in her own right, not just in relation to the novel’s male characters. There should be more YA protagonists like Ryan’s Waverly.

In contrast, I found Kieran more difficult to like and certainly more difficult to identify with. It is a testimony to Ryan’s ability that his sections of the text could be different enough from Waverly’s sections that they were able to leave me with a feeling of uneasiness, as opposed to my easy appreciation of Waverly. Kieran’s self-assuredness and conviction felt somehow dangerous. And yet Seth, whose actions should have made me despise him, seemed more likeable – and perhaps even safer. He is violent and dishonest, but somehow Ryan manages to convey that there is more to him than that. I loved the fact that I didn’t know how to feel where Glow‘s main male characters were concerned.

The most obvious example of Ryan’s talent for tearing reader assumptions into pieces can be seen through her exploration of the attitudes and actions of the religious and secular leaders aboard the two ships. There is no easy, black-and-white delineation of good and bad here. Glow is a study in greys. That is what makes it such a great book. My only real criticism is that this uncertainty extends to the novel’s conclusion. As the first book in a series, it lacks a solid ending, encouraging the reader to return for more – but perhaps leaving them a little unsatisfied in the interim.

I hope that Glow will receive the recognition and popularity it deserves. In a market that deals so often in reworks of the latest fad, it stands apart as a book with true depth. I can’t wait to read the sequel.