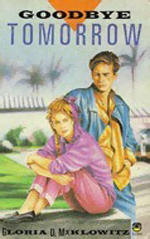 I enjoyed Goodbye Tomorrow when I first read it as a teenager. I knew a lot less about HIV and AIDS back then and I wasn’t so political a reader, so it was interesting to revisit the novel with an adult and modern perspective.

I think that Miklowitz had very good intentions when she wrote Goodbye Tomorrow, bringing the facts and emotions of AIDS to a young adult audience. In the end, however, the book lacks heart, and now feels extremely dated.

One difficulty is the fact that the novel is written from three different first person perspectives – those of Alex, his sister and his girlfriend. These perspectives change often and, while they do allow Miklowitz to show the reactions of different people to Alex’s diagnosis, they leave the reader feeling rather disconnected from the characters.

My greatest issue with Goodbye Tomorrow, however, was the way the novel deals with the connection between HIV/AIDS and homosexuality. There are far too many gay “jokes” here, and there’s no real justification for them. The overall moral of the novel seems to be that good people can get AIDS too – not just gay men and drug users – so it’s wrong to be prejudiced against people who suffer from the illness. There’s even a startling statement towards the end of the book about how it’s likely that fifty per cent of gay teachers (and, presumably, all gay men) are HIV positive.

Goodbye Tomorrow may have been ground-breaking and important in 1987, but unfortunately it hasn’t aged well. The way the novel represents homosexuality and the dated facts it conveys combine to make it a novel that is no longer relevant in 2012.