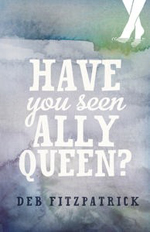 With Ally’s mother struggling to cope with the mental after-effects of witnessing a bad car accident, her parents decide to move away from Perth and into a rural beach town. Ally struggles to fit in with her new schoolmates, a situation made only the more difficult by her mother’s worsening health. Will she adapt to her new life, or will it all prove too much?

Deb Fitzpatrick’s second novel, Have You Seen Ally Queen? is a contemporary YA offering with a literary style. The chapters are unusually brief – one is just one page – and the narrative voice is also quite short, with situations often being described through short moments in time and character interactions rather than deep insights into Ally’s head.

In some senses, it felt a little like Fitzpatrick’s taciturn tone undermined the character of her protagonist. The reader is told that Ally is spontaneous and unrestrained and a bit of a loudmouth, but the first person narrative often seems to give the exact opposite impression. It is difficult to know how much this was planned by the author. Should the reader consider it an indication of an unreliable narrator and an example of the ways in which Ally is struggling to discover herself as a maturing teen in a new location? Certainly, it could be read that way, but I personally found it contributed to my lack of identification with the novel’s protagonist.

Ally is realistic and age-appropriate, but she doesn’t give much of herself to the reader – at least not readily. Much in Have You Seen Ally Queen? is implied, rather than stated, which is a technique I love in short fiction but one that is not commonly found in novels for young readers. I’m not sure it works in this context. There is a lack of immediacy in the book, despite it being written in present tense, and this meant that I was not captured by the plot when feeling distant from the protagonist.

It’s a pity that I couldn’t get into the style of Have You Seen Ally Queen?, because the content of the novel is fantastic. It combines coming-of-age themes with a very real exploration of mental illness and the effect it can have on the loved ones of the sufferer. Fitzpatrick does not make Ally’s mother unsympathetic, but also does not shy away from the full range of reactions experienced by Ally herself – some of which are quite critical of her mother’s behaviour.

In terms of the issues it explores, Have You Seen Ally Queen? has a lot to say to young readers, so I hope that it does well, despite my personal lack of connection with its style.