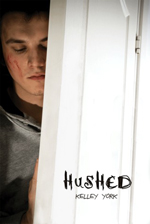 Archer would do anything for his best friend, Vivian. He’s proven that several times over by now – in the most drastic of ways. But then Evan arrives in town and, for the first time, Archer begins to question the hold that Vivian has over him. Evan’s love may have the power to change Archer, but is it too late?

Hushed is a tense novel that will have its readers hooked from the opening pages right through to its conclusion. It presents themes of love and loyalty and explores the aftermath of trauma and the choice to follow a particular path. While its content and focus are definitely gritty, Hushed doesn’t feel unduly dark. Indeed, I came away from the book feeling almost uplifted; for every depressing or sordid occurrence, there is a helping of love or hope.

The thing that really makes Hushed is the artful depiction of its protagonist, Archer. Multiple times within the novel, Archer is referred to as a “monster”, but somehow he is also extremely sympathetic and, amazingly, highly likeable. If someone were to tell me about a book with a loveable murderer, I would scoff, but that is exactly what Kelley York has produced. The reader can’t help but hope that, in spite of his crimes, things will work out well for Archer.

In contrast, Vivian is very difficult to like. Although we are given reasons for her behaviour, we are also shown that there were other paths that she could have followed. There is just something about her character that made me wary from the start. Archer’s devotion to her is perfectly plausible, however. She is cleverly described as just the sort of person who possesses that kind of hold over people.

Evan is sugar where Vivian is poison. He is perfectly understanding, perfectly devoted… and fairly perfect all round, for that matter. He offers the kind of unconditional care that Archer needs to start to break free of Vivian’s hold over him. The difficulty I had with him as a character, however, was the fact that he mostly is shown as being a positive force in Archer’s life. We don’t learn as much about Evan himself as I would have liked – just glimpses of the way he fits into Archer’s world.

The romance here is very nicely done, with little focus on the genders of the people involved. While there is definitely a place in YA literature for tales of coming out and the establishment of sexual identity, I think they tend to dominate the market more than they should. It was refreshing to read a book where the romance plays out much as it would with a heterosexual couple, but without ignoring the social implications of a same sex romance.

As mentioned, some of the content in Hushed is quite dark, and I would recommend it to readers from the late teens upwards. While the main characters are in their first year of university, I think that the plot and execution of the novel will endear it to adult readers as well. An engrossing and though-provoking read.

Review: He’s After Me – Chris Higgins