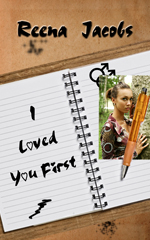 Alex is in love with her best friend, Seth. The trouble is, he’s gay. Worse still, he’s so deeply in the closet that he dates a never-ending string of girls to keep up appearances, but never so much as looks at Alex in the way she dreams about. As Seth’s charade begins to fall apart, so does his friendship with Alex. Being in love with her best friend is hard enough. But could Alex lose him altogether?

I Loved You First is an easy, enjoyable read with a positive underlying message. Its stand-out feature is the strong character voice of Alex, which remains consistent and appealing throughout the book. The first person narrative quickly draws the reader into Alex’s world and encourages them to empathise with her situation.

Alex herself is a likeable character. While, at times, her choices were frustrating, I never resented her for making them. She is flawed, certainly, but this is the story of her growth from an invisible sidekick into an independent young woman, and change rarely occurs without a few mistakes to be learnt from. At times, I wanted to reach into the book and shake Alex out of her unflappable loyalty to Seth, especially when he was being particularly belligerent and she was being particularly submissive. Such a response shows both my fondness of Alex as a character and my total absorption in the book!

In contrast, Seth is a difficult character to like. I understand why he acts the way he does, but it doesn’t make his behaviour any easier to stomach. I found that I mostly felt sorry for him – not so much due to the attitudes of others as due to his own attitude towards himself. Indeed, Alex, despite harbouring her fantasies of being the one woman who can overcome Seth’s sexuality, is far more accepting of his identity than he is. There is a self-destructive aspect to Seth’s behaviour that is almost as difficult to witness as a reader it is for his best friend.

The minor characters in I Loved You First are well-drawn, with Trinity being a fun and likeable late addition to the ensemble and Bruce offering the right amount of villainy to the plot. Dink is multi-faceted and provides an important alternative to the black-and-white portrayal of Bruce. I changed my opinion of him several times throughout the book, as various aspects of his character were revealed.

For me, the best part about I Loved You First is the personal growth that Alex experiences as the novel progresses. While much of the action of the book is centred around Seth, the heart of the book is Alex’s struggle for emotional independence. Always a realistic character, she evolves into a truly strong young woman.

Jacobs’s style is chatty and unforced. The writing could have been a little tighter in places but this is well-masked by the casual nature of her protagonist’s voice. I also found the overwhelming homophobia shown by many of the book’s characters out of keeping with my own experiences with university educated young adults, but am aware that my nationality and the educational circles I’ve moved in may be a key factor here.

While I Loved You First focusses on university-aged characters, the subject matter and content are appropriate for all young adult readers. It is a light read dealing with heavy subjects – homophobia and the emotional (and physical) damage it causes – and is a very solid young adult debut by Jacobs.