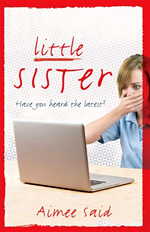 Allison Miller is counting down the days until her over-achieving elder sister, Larissa, finishes her year twelve exams and leaves their school for good. Then, she hopes, she will finally be able to step out of Larrie’s shadow and be known for her own qualities, rather than just in comparison to her sister. But then, as the end of the year draws closer, rumours start circulating about Larrie and her best friend, and Al has to decide whether to support her sister or distance herself for fear that her own reputation will be ruined as well.

Little Sister is a fast-moving novel that I found surprisingly difficult to put down. I had expected it to be a fairly generic tale of sister rivalry, but was pleased to discover that it had a deeper message and dealt with bigger issues. Said’s characters are exposed to bullying, homophobia and sexual and peer pressure, but the novel avoids the moralistic tone that can often accompany young adult books that focus on such things.

Al is a sympathetic protagonist who many readers will be able to identify with. She’s likeable, but realistically flawed. Extremely concerned with her image, Al is overly focussed on her sister’s achievements and measures her own self worth in reference to Larrie. While she often treats the people around her poorly due to frustration, fear, lack of tact or her own feelings of inadequacy, she is ultimately loyal and kind-hearted. At times, I found her self-involvement irritating, but I never found her reactions unbelievable.

Said’s portrayal of Larrie was particularly well done. As the reader views her through Al’s biased eyes, her character becomes more rounded and likeable as the book unfolds. Initially, she is portrayed as self-absorbed and mean but, as we learn more about her and as Al begins to understand more about her sister – and about her own sister-related baggage – she becomes more appealing.

GLBTQ individuals are still greatly under-represented in fiction for young adults, so it is always good to discover a new author who writes such characters well. Telling a coming out story from the perspective of a family member could very easily feel forced or impersonal, but Little Sister seems to have been well-informed by Said’s experiences with her own GLBTQ-identified sister.

Overall, the theme of Little Sister is acceptance – acceptance of the people around you and acceptance of yourself. It is an easy read, but one that carries a deeper message than may at first seem apparent. Said has penned a great addition to the growing catalogue of Australian YA fiction.

That said, all of those Facebook references are really going to date it in a few years’ time!