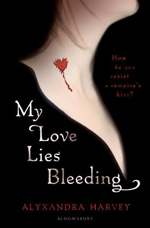 Solange Drake is both a born vampire and female – a combination that hasn’t occurred in over nine hundred years. Unfortunately, her rarity puts her in grave danger as she approaches the bloodchange, largely due to a prophecy that suggests she will be the new vampire queen. As things spiral further and further out of control, it falls to Lucy, Solange’s human best friend, and Nicholas, her youngest brother to try to save Solange from all those who want her and her family dead.

I picked up My Love Lies Bleeding, not expecting to be particularly excited by it. The cover made it seem like your average paranormal romance and, while I tend to appreciate them as brain candy, they’re generally quite forgettable once they’re done. However, while My Love Lies Bleeding contains elements of romance, it is largely an action-filled story about family, friendship and conflict between various vampire groups and their hunters.

My favourite part of the Twilight novels was the Cullen family, Edward excluded, and I know I’m not alone in that opinion. My Love Lies Bleeding was a lot like getting a whole book about the Cullens, with Edward becoming the self-sacrificing Solange and Bella her brilliant best friend, Lucy. Solange’s parents are great, with her father being a quiet diplomat while her mother is a formidable warrior, and her seven older brothers and extended family ensure that the Drake family will not be quickly forgotten.

For me, Lucy was the best part about this book. The story is split between two perspectives – hers and Solange’s – and Lucy’s chapters were the ones that I particularly enjoyed. I know that people are getting a little sick of the kick-arse heroine trope, but I’d personally take it any day over the kind of bland, weak female protagonist who is still far too common in young adult fiction. Lucy is feisty and likeable, with her loyalty to her best friend and Solange’s family being unwavering.

Solange is also an interesting character, although not as much one of my preferred character types. She is very selfless and, instead of embracing the prophesy that suggests that she will control the vampire world, she shies away from it and worries about the danger she is subjecting her family to. Although a much quieter, calmer character than Lucy, Solange can still hold her own in a fight and definitely shouldn’t be underestimated.

With two protagonists, the romance is also twofold in My Love Lies Bleeding. Neither romance dominates the plot, however. Kieran, a member of the vampire hunting group Helios-Ra, will appeal to those readers who appreciate connections that cross factions. In contrast, Nicholas may be a vampire, but first and foremost he is Lucy’s best friend’s big brother. Their attraction, therefore, is much more the kind of thing you would generally find in contemporary realistic fiction, than in paranormal romance!

In My Love Lies Bleeding, Alyxandra Harvey has created an interesting universe populated with likeable characters. I shall definitely be picking up the next book in the Drake Chronicles series.

Review: Notes to Self – Avery Sawyer