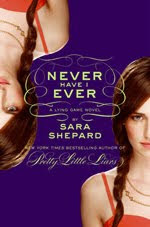 With Never Have I Ever, her second instalment in her The Lying Game series, Sara Shepard keeps the positives of the first book and cuts many of the negatives, leaving us with a better book overall. While I enjoyed The Lying Game, its sequel really drew me in and I think I’d now have to call myself a fan of the series.

All of the characters from the first book return for the second, but the big difference here is that the Twitter Twins, Lili and Gabby, play a much bigger role. Initially very annoying, they slowly become more likeable as the novel progresses, much as Laurel and Madeline continue to develop and become more-rounded characters. (Charlotte, in contrast, seems to slip into the background.) Most of all, however, Sutton seems to come into her own in Never Have I Ever. With the back-story out of the way, her strong voice is able to take over, so we find her cheering Emma on and groaning at her mistakes and truly feeling like a real character. Although it’s interesting to see Emma becoming a little more like her twin as the series progresses, it’s Sutton who seems to have the most room for character growth.

Once again, the mystery is at the forefront of the novel, and much of the plot is concerned with the identification of new suspects, along with a few new threatening situations that Emma finds herself in. While there’s certainly a formula to these books, that doesn’t mean that it isn’t fun to watch it play out, even if we do work out the truth long before Emma and Sutton do! Shepard manages to keep the suspense high throughout the novel, which makes this a page turner and a surprisingly quick read.

My only real criticism of Never Have I Ever is that there were a couple of inconsistencies with the continuity. For instance, Emma uses Sutton’s iPhone at a point where it was still confiscated by her parents and, towards the end of the book, Sutton looks at Emma despite earlier stating that she can only see the world through Emma’s eyes. While such mistakes tend to draw the reader out of the action temporarily, however, they don’t detract from one’s overall enjoyment of the book.

Never Have I Ever was a lot of fun and its mystery well and truly has me hooked by this point. I’m definitely looking forward to reading Two Truths and a Lie.