Review: Over My Head – Marie Lamba 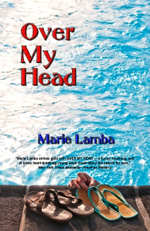 Sang is determined that the summer before her senior year is going to be special. Unfortunately, her plans take a hit early in the piece when she discovers that, not only is her crush mooning over an older girl, but her trip away has also been replaced by a summer of swimming lessons at the local pool. Things start to look up when Sang meets gorgeous lifeguard Cameron, but there is something deeper behind her parents’ recent money issues and Sang will soon find herself forced to decide where her loyalties truly lie.

Although Over My Head is really a sequel to Marie Lamba’s What I Meant (Random House), it reads perfectly as a stand alone novel – which is good, given that I’ve not read the original! It’s an entertaining contemporary YA offering, which has a generally light tone but nonetheless manages to deal with some very big issues in a particularly sensitive manner.

Sang is the daughter of an Indian-American (Sikh) father and an American (lapsed Catholic) mother, and this heritage informs much of the novel’s plot and the issues that Sang encounters within the book’s pages. Sang herself is represented as being very much American, despite her strong ties to the Indian side of her family, and much of the novel’s action centres around the conflict between Sang’s American sensibilities and her father’s traditional Sikh values. Lamba does an excellent job, however, of ensuring that the father remains a sympathetic character, even when he is most at odds with Sang.

In fact, all of the members of Sang’s family are well-drawn and pleasantly three-dimensional. The embarrassingly nicknamed Doodles felt a little young for her age, but that could well be a result of her over-protective upbringing. Hari is, at turns, caring and frustrating, much like a big brother should be, and their mother felt particularly well-developed to me. The reader is given several poignant glimpses into her own, personal story as someone who has married into a different culture.

Raina, Sang’s cousin, who is visiting from India, is very likeable, although she sometimes feels more like a foil to Sang than her own person. It is her story that felt the most unfinished at the end of the novel and I would have liked to see more of her adjustment to teenage life in America and any conflict that may have existed between the world Sang was drawing her into and the values that had been instilled in her by her parents. Another sequel, perhaps!

Of the three boys who influence Sang’s summer, Cameron is the most thoroughly-developed. I’m still not entirely sure what to think about him, though. As the love-interest of a fairly naïve sixteen-year-old, he makes perfect sense, but there’s something about him that rubbed twice-as-old me up the wrong way from the very beginning. In contrast, I really liked Dalton and wished that we’d had the chance to see a little more of him in Over My Head. While he (understandably) becomes frustrated with Sang at times, he is kind, loyal and dependable and is a great friend to her whenever she needs it – and regardless of whether she deserves it. Team Dalton all the way.

Finally, Sang herself is wonderfully realistic. She’s passionate and impulsive and sometimes thoughtless, but she has a good heart, which is always obvious, and a strong love for her family. She doesn’t always get things right, but the reader is left feeling that she will learn from her mistakes and grow into someone admirable in the end.

Over My Head is a strong contemporary offering, with an interesting, multi-layered plot and a likeable cast of characters. Marie Lamba deals with cultural conflicts with warmth and sympathy, while accurately representing young love, with all its accompanying mistakes and embarrassments. A solid read.

Review: Still Sucks To Be Me – Kimberly Pauley