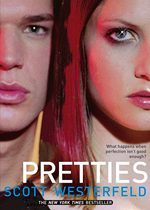 Tally is pretty now. Her time in the Smoke is over and she’s settling into the life she so desperately wanted for the first sixteen years of her existence. She has her best friend, Peris, back, her friendship with Shay is rejuvenated and she seems like a sure bet to be accepted into the Crims, the coolest clique in New Pretty Town. But for some reason, Tally feels like she has to try a little too hard to fit into the pretty world. Her memories of the Smoke are faded and confused, and yet something is tugging at the edge of her conscience. Something important. But what?

I wasn’t sure what to expect from Pretties, as review opinion seemed to be divided upon whether it was a better or worse book than Uglies, its predecessor. Personally, I think I come down on the side of it being better, largely by virtue of the fact that its place in the trilogy meant that Pretties was able to jump straight into the action, without all of the scene setting and universe building that made Uglies a slower read in places.

Pretties is a fantastic adventure yarn. Apart from a couple of short sections, the book moves at an exciting pace, pulling the reader from one heart-pounding (or perhaps bubbly-making!) situation to the next with little time wasted on exposition or internal monologues. The noticeable exception to this rule was the section of the novel devoted to Tally’s time among the pre-Rusties. I’m interested to see whether this diversion proves important to the final installation of the trilogy, because it felt a little unnecessary to Westerfeld’s plot and slowed the action at a pivotal point.

As a protagonist, Tally worked so much better for me in Pretties. She seemed to act, rather than merely react. While I didn’t like her much at all in Uglies, I became rather fond of her in Pretties – she was your typical tough female action hero, and that’s a character archetype that I always enjoy. I think my greatest difficulty with her as a reader came from an element of the plot relating to the brain lesions associated with her becoming pretty. I won’t specify due to spoilers (although those who have read the book will easily guess what I’m talking about) but it had a bit of a Mary Sue feel to it.

I really enjoyed the introduction of Zane. Chris held little interest for me, but Zane felt like a rounded and realistic character. I also preferred the nature of his relationship with Tally. It felt like it grew out of commonality rather than the oh-so-common instant attraction that one finds so often in YA fiction.

In contrast, I was disappointed by Shay’s role within this book. I’d hoped that the boy-centric rivalry of the first book would have a satisfying resolution in the second but, unfortunately, this was not the case. I had my rant about this in my Uglies review, so I won’t repeat it here, but I think there are better ways of introducing conflict.

All in all, Pretties was a solid adventure offering, which set things up for a strong finale in Specials. Whether Scott Westerfeld managed to pull off that perfect ending, however, is something I’m yet to discover.