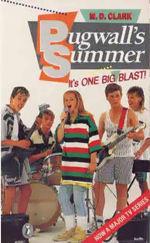 I was obsessed with the first Pugwall book in upper primary school. It’s only very recently that I’ve come to terms with the fact that I lost my copy after one of my school friends borrowed it and never gave it back. I managed to keep hold of my copy of this sequel, however, although I hadn’t read it for nigh on two decades by the time I picked it up recently, and decided to give it another try.

As a kid, I never liked Pugwall’s Summer anywhere near as much as the original. As an adult, it’s a little hard to compare the two, given that it’s been so long since I read Pugwall, but I think I can guess why. Pugwall’s Summer doesn’t have quite as much heart as I remember the original having. There’s plenty of action here, and some great interactions between Pugwall and Marmaloid, his annoying little sister, but I didn’t find myself becoming very invested in the characters.

I think part of the reason for this was the fact that I loved the growing friendship and then romance between Pugwall and Jenny in the first book, but Jenny seems like a completely different character here. Something that was a big focus of the original is just discarded in this one, as though it were unimportant, and that didn’t work for me at all.

What did work, however, was the brilliant late-eighties-Australia nostalgia that Pugwall’s Summer promotes. There’s slang in here that I probably haven’t used since primary school, and reading the novel feels like going back in time to that era. It’s set in Geelong, with lots of talk of nearby coastal towns, like Torquay, and there’s even a school excursion to Melbourne. Any Australian child of the eighties will enjoy the reminiscent aspect of the book.

Re-reading Pugwall’s Summer doesn’t make me any less keen to one day get my hands on a new copy of the original. I’m not sure I’ll revisit this one again, however. Instead, I think I shall head over to YouTube to watch clips of the television show based on these books – which was one of my favourites, back when it first aired.