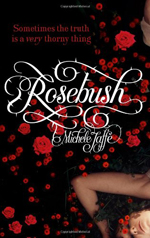 It was very interesting picking up Rosebush not long after having read The Lying Game, because both books involve characters trying to remember the events that led up to them dying/almost dying and both focus on a group of popular kids who are not very nice. The key difference is that you find out who the attempted killer was at the end of Rosebush, which was a good thing for my poor, frustrated brain, as it probably couldn’t have taken a second cliff-hanger!

Because of the nature of the novel, Rosebush incorporates a lot of flashbacks, most of which work very well. I have to admit that I skimmed over the lake nightmares, though, because they felt unnecessary and didn’t fit very well with the style of the rest of the book. On the whole, it’s a very smooth and easy read, capturing its readers through plot rather than overly clever language.

Jane works well as a protagonist because, although she’s extremely popular in a school situation, she’s not presented as being cruel to people around her. She is very flawed, however, in that she’s quite a weak individual who places popularity before friendship and has a desperate need for the love of the people around her. This might be a little more grating if such behaviour hadn’t stemmed from the loss of her father. Instead, the reader is given reasons for her interactions with her peers and for the initial state of the relationship between Jane and her mother.

One thing that didn’t seem quite as well-explained by Jane’s loss was the way she reacted to the different romantic options that were presented in the novel. One love interest in particular seemed to be extremely sudden and not very well justified, despite being the one that sticks. I think the bisexual (?) side plot could have been done better as well.

That said, Rosebush is not a romance novel, and such minor criticisms detract little from the book. The key to Rosebush is its plot and in the mystery of which of Jane’s friends is trying to kill her, and this mystery does a very good job of holding the reader’s interest until the very end. A well-paced and entertaining novel that made for a great public transport read.