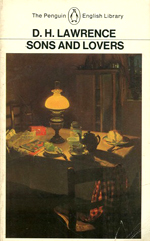 I picked up Sons and Lovers as the next book to read from my 100 Books list, simply because I’m trying to cull my book collection at the moment, and years of hearing how much people dislike D.H. Lawrence – and this book in particular – led me to assume that I’d have a similar reaction. Really, I should’ve known better. After all, I like Conrad!

I find it fascinating that so many people have been bored senseless by Sons and Lovers, because I was interested and entertained from start to finish. It’s true that there is not a great deal of plot here. Rather, it’s a book that focuses on character and on family relationships. It’s slow-moving and slightly dreamy tale, and Lawrence holds his characters at something of a distance from the reader, but I was nonetheless ensnared very quickly in the piece.

Most of the characters here are awful. There are no genuinely likeable people amongst them. Annie is quite inoffensive and I found myself rather sympathetic to Walter Morel, despite his faults, possibly because of how keenly he was judged by his family for his lack of pseudo-middle-class airs. Or perhaps it’s just that Gertrude and Paul are just so utterly detestable that I feel a kind of solidarity with anyone they disdain. I feel a bit cruel saying so, given that Sons and Lovers is highly autobiographical, but Lawrence certainly didn’t represent himself in his best light when he took on the guise of Paul Morel. And I feel utterly sorry for Jessie Chambers, upon whom Miriam was based, because Miriam is portrayed with such disgust. Clara, too, is sneered at and the reader is left to wonder whether it is merely Paul Morel who has such a Madonna/Whore complex (to go with his Oedipus Complex), or whether that stemmed from Lawrence himself.

Despite the ghastly characters, however, I found Sons and Lovers itself thoroughly likeable. The writing is lovely – elegant but not overwrought – and I’m a big fan of these kinds of slow, intimate stories of family and human nature. I shall be very interested to see whether my enjoyment of Sons and Lovers extends to all of Lawrence’s work. In the meantime, this will not be joining the pile of books to give away!

Review: Does My Bum Look Big In This? – Arabella Weir