Review: Stay With Me – Paul Griffin 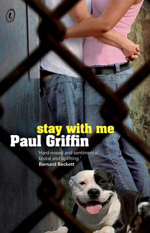 Three Things I Liked About Stay With Me

(1) There is an extremely strong use of voice throughout Stay With Me. Griffin does a great job of differentiating between his two protagonists through the way they tell their stories. The reader is unlikely to become confused about who is speaking, because the two voices are very different.

(2) The character of Vic is fantastic. His unwavering belief in the people around him is extremely important to making this book readable, despite the overwhelming negativity of the situations described in it.

(3) The dogs in Stay With Me are obviously written about by someone who knows and loves dogs. There is a strong and obvious parallel formed between them and Mack, and this is cleverly done, inserting a little hope where it is most needed.

Four Things I Disliked About Stay With Me

(1) I found that the age of the characters detracted from my enjoyment of the story. I didn’t think that either character really felt fifteen in terms of the way they interacted with the world and each other. The stakes in their romance were reduced by their ages; relationships between fifteen year olds rarely last, so it felt like the events of the book only hastened the eventual outcome.

(2) I was a little concerned by just how blasé the book was about underage sex. There was the sense that it is expected and right for fifteen-year-olds to rush into sexual relationships. Obviously this is something that happens, so I’m not questioning the realism, but rather the way it was presented as being inevitable.

(3) Stay With Me is mostly shade without many touches of light. Everyone in this book has bad things happen to them – even the dogs. I think that realism in fiction is fantastic, but I also think that things can reach the point where tragedy and bad life situations are heaped on top of each other to force emotional reactions that the reader wouldn’t otherwise have had.

(4) On a very personal note, I struggled with reading about the many abused dogs referred to in the story. I think that Mack’s relationship with the rescue dogs he trains is the most positive, powerful thing about Stay With Me, but the backgrounds of these dogs and their resilience to human cruelty was the element that made me come very close to stopping reading this novel, due to my own sensitivity to such things.

(Warning: Contains a lot of discussion of animal abuse and an animal death, violence and underaged sex.)

Review: How To Be A Vampire – Katy Hall