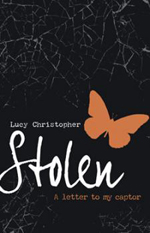 Stolen is an extremely cleverly written book. It’s essentially a book about Stockholm Syndrome, written for a young adult audience, and its greatest feature is the way that Lucy Christopher takes the reader along on the same emotional ride experienced by protagonist Gemma. At the beginning of the book, Ty – her captor – comes across as creepy and unappealing but, as he reveals more of himself and more of the past that led them both to the Australian outback, he becomes a surprisingly sympathetic character. I never found him truly likeable, because there always remains something dangerous about him, but many other readers have been completely won over by the end of the novel. Manipulating one’s readers in such a fashion takes a lot of writing skill. Although Stolen has its faults, I came away from reading it with a healthy respect for the author’s talent. I love a book that can mess with my head.

As suggested above, however, Stolen isn’t flawless. At times, it feels over-long. There is a lot of description of the Australian outback and I’m not sure whether I’m just jaded to that, as someone who lives in Australia and has been fed images and romanticised perspectives of the outback all my life, or whether the description really does take over a little at times. For the first half of the book, I wasn’t very engaged at all. I kept reading because the premise interested me and the writing style is elegant and clever, but I wasn’t invested in the characters or their actions. I think the beginning of the change in Gemma’s attitude towards Ty also marked the beginning of my greater interest in the novel. Perhaps it was a case of my needing more movement in terms of character development and plot or perhaps it just comes down to me being in a more receptive mood by the time I reached the second half of the book. Either way, my near-indifference was not lasting and I definitely enjoyed the latter half of the novel and the book as a completed whole.

I think that’s really how Stolen should be assessed. Its power doesn’t lie in its characters or even in the artfully described and ever-present setting. The true power of Christopher’s work is its ability to draw its readers in and to make them feel a little of what Gemma is feeling. Her confusion became my confusion. And that’s the sign of a good author.