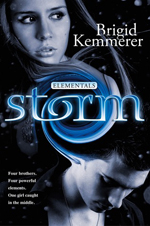 I was really interested in getting my hands on Storm after reading some of the early reviews that have been posted. A lot of people have been saying that it’s a paranormal novel for teens that doesn’t feel exactly the same as the rest, and that had me intrigued. I usually enjoy paranormal aspects in fiction a lot; what I don’t like is the current fad for books that feel so very similar once you get past the shallow differences like character names and location.

Luckily, the reviewers were right. Storm does feel different. Largely, it’s because the romance here is always secondary to the action. But it’s also because of the interesting premise and the great characters than Brigid Kemmerer has created. The Merrick brothers have the potential to be huge, and rightfully so, because they’re the highlight of the book.

Putting the paranormal element (ha!) aside, I was actually reminded a little of S.E. Hinton’s The Outsiders when reading this book. There’s the same feeling of kinship and desperation with the boys and, of course, the family situation is also similar. I think most readers will come out of reading Storm with a favourite brother – and possibly a second favourite as well. (For me? Nick, with Michael in second place.) I loved how their interactions felt real. They fight like family and love like family, and that’s such a hard thing to capture. They’re not always likeable, but they’re never dull or one-dimensional.

It’s hard for me to describe my feelings about the novel’s protagonist, Becca, without giving away a lot of the plot. I liked that she’s caring, and that she’s strong in a quiet sort of way that forms a nice contrast to the strength of Hunter and the Merrick boys. I particularly liked that the book opens with her saving the male character, rather than it being the other way around. I think her fears and insecurities and her self-blame are all understandable and realistic, although I would have liked the victim blaming to be rebutted a little more strongly in the book.

Kemmerer’s clever concept of the elemental powers and affinities is also very well developed. Readers will come away from Storm with a sheepish urge to try to manipulate the elements themselves, because there is something so close to believable in the way it is explained. The pacing of the novel joins with this great premise and makes it extremely difficult to put down. It’s engaging and often exciting and a very enjoyable read.

One key aspect of Storm disappointed me, however, and it is one sense in which it is not so different from the glut of paranormal romances in the teen market. I am noticing a disturbing growing trend for authors to introduce rape and attempted rape as plot points intended only to allow a male character to rescue a female protagonist. In Storm, the attempted rape scene is particularly harrowing, and could prove very triggering to a lot of readers. It’s a lazy and disconcerting plotting practice and I believe that most authors are better than it, so I wish they would prove that fact by showing that a boy is kind or devoted in another way. Overall, I’m ambivalent about the presentation of female sexuality in this novel, so I hope that the rest of the trilogy turns that ambivalence to a more positive feeling.

Despite this, I really did enjoy Storm a lot. I love the Merrick brothers and the premise and the way that the plot kept me guessing from start to finish. I’m glad that there isn’t a whole year to wait until the next book, because I want to read more about this universe a lot sooner than that!

Warning: Includes an attempted rape, as discussed above.

Review: Stay With Me – Paul Griffin