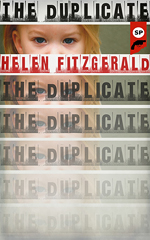 The Duplicate was introduced to me as a story that had been inspired by Carrie and Frankenstein. With that first impression, I just had to read it! The author, Helen Fitzgerald, refers to it as her “short, dark, weird one” and I was pleased to find that both the literary references and the promise of weirdness were supported.

Although written for the young adult market, The Duplicate should prove equally pleasing to adult readers. What teenagers will consider an entertaining read, will likely provoke greater thought in an older audience. There are many ethical and philosophical questions raised here, albeit in a black and quirky manner, and the things that are left unsaid nonetheless stick with the reader for a while.

My introduction to Fitzgerald’s work was Amelia O’Donohue is So Not a Virgin, which wowed me with its understated style and ability to convey character and plot without shoving them in the reader’s face. The Duplicate goes even further, with much of the story being implied, rather than outwardly told, especially in the sections told from the perspective of Barbara. It’s a stylistic choice that I’m always a big fan of, and it works particularly well with the science fiction edge to the novel.

I think the key similarity to King’s Carrie lies, not in the depiction of an unpopular girl who is tormented by the popular crowd at school (because, let’s face it, that’s a common theme in YA and real life), but rather in Barbara herself. It’s easy to feel sympathy for her as a character, but also easy to dislike her. It’s not that she’s weird: that’s actually a mark in her favour. Rather, it’s her overwhelming determination to buy the favours of the very people who make her life hell, changing her appearance and losing her dignity in the process.

In comparison, Rowena is likeable, surprisingly well-adjusted and, well, normal. The build-up of tension during her section of The Duplicate is very cleverly done, to the point of me being on the edge of my seat expecting a ghastly murder to eventuate at any moment! Sometimes I find dual protagonists unnecessary and a little irritating, but here they are used authentically, and I think Rowena’s voice forms a positive contrast to that of Barbara. I don’t think the book would have been nearly as effective if it had been told solely from the latter’s perspective.

The Duplicate is a clever, engrossing story, with a concept that I loved. The ending is fantastic, and my imagination is still running wild, thinking about what happened after the final page. A quick read, but an enjoyable one.