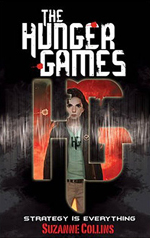 The Hunger Games is divided into three parts and my opinion of the book at the end of the first part was vastly different to my opinion once I had read the closing words. Initially, I struggled to become emotionally invested in the characters and Suzanne Collins’s universe. There is a lot of information in part one, without a lot of accompanying action, which causes the book to feel quite slow moving at times. In addition, I struggled with the bleakness of the opening chapters. When not tempered by action and dramatic tension, the Hunger Games universe is difficult to read about. Instead of being an escapist pastime, the reading experience felt more akin to being nose-deep in the most depressing sections of a newspaper.

From the beginning of part two onwards, however, I was hooked. The relationship between Peeta and Katniss becomes more interesting, the games themselves begin and it becomes easier to connect emotionally with the characters – both major and minor. In particular, Rue managed to both win me over and make me warm to Katniss, whom I had remained undecided about until her attitude towards Rue convinced me to like her. And I do like her. A lot. Collins has very cleverly crafted a protagonist whose life has made her mature beyond her sixteen years in many ways, but who nonetheless still shows signs of youth and naivete as well.

Peeta is similarly likeable. At times, he comes across as being a little whiny, but I think his vulnerability is necessary to moderate the impact of Katniss’s strength. As The Hunger Games is told in first person, from Katniss’s perspective, Peeta’s motivations remain pleasantly obscured throughout the book – although certain things that remain unrealised by Katniss are blatantly obvious to the reader! Of course, it’s rare for a book or series for young adults to exist today without the presence of a love triangle, so the memory of Gale is also strongly present throughout the novel. However, while this will undoubtedly become more of a focus in the second and third trilogy instalments, here the romance remains secondary to the battle to survive – as it should.

There is little in The Hunger Games that is entirely original, whether it be in terms of plot or premise. But the same can be said of most novels and here, at least, Collins has constructed a universe that has the ability to horrify and characters who are rounded enough to provoke tears upon their death. When reading this, I was reminded often of Stephen King’s (writing as Richard Bachman) The Long Walk. Both are based around similar concepts but, more importantly, both dug their way inside of me and lingered long after I turned the final page.

I wasn’t sure about The Hunger Games at first. When I finished it, however, I immediately ordered my own copy, along with Catching Fire and Mockingjay. I think that says it all.

Review: Amelia O’Donohue is So Not a Virgin – Helen Fitzgerald